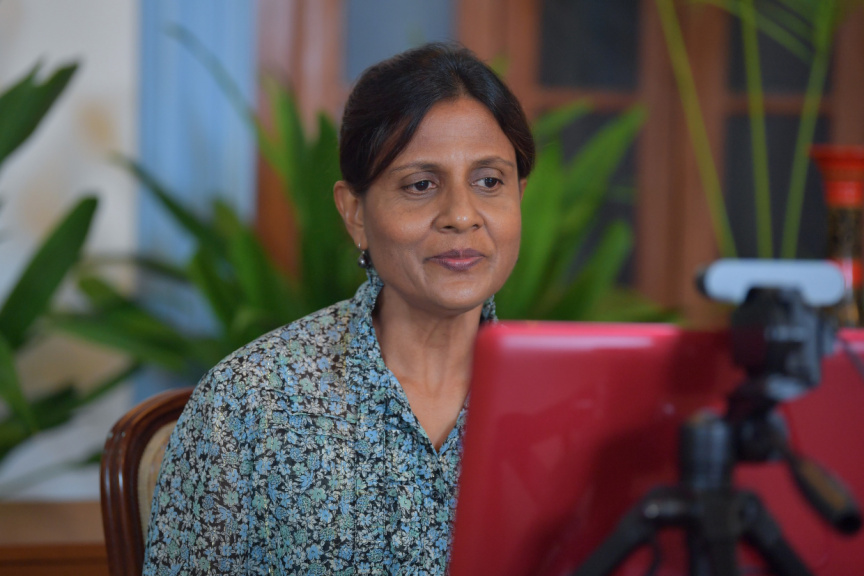 The virtual discussion – “We, the people and our planet: Healthy, resilient, Sustainable", was organized by the World Health Organization (WHO) Regional Office for South-East Asia.

Speaking at the session, the First Lady highlighted a global survey of children and young people on the climate problem. She noted that a significant majority of the young people surveyed believed that rapid climate action might help mitigate some of the most catastrophic effects of the situation.

She stated that as an educator, she considered it valuable to listen to young people, their ideas, recommendations, and fears, as well as to validate their distress about issues that affected their lives.

Speaking further about the survey, she said that it discovered a knowledge gap between different economic classes about what a climate crisis entailed. She said that schools were among the best ways to bridge this knowledge gap.

“My time as a former principal at Thaajudheen School has allowed me to make many observations and taught me many things about children. Which is why I am emboldened with the belief that children and young people possess enough knowledge to articulate their opinions and frame their perspectives of the world, to meaningfully contribute to the process of decision-making."

Moreover, she said that though the study showed that the youth were concerned about the climate crisis, they were also optimistic and wanted to contribute more to the cause.

She emphasized the significance of giving children and youth a platform to express their views on issues like gender equality, the environment, and climate action. She added that this was important as their future would be affected by decisions that are currently being made.

Furthermore, she said that the ambition of the youth was far greater and that they were capable of becoming agents of great change if given the opportunity.

"To the children and young people, I want to say that I hear them. Witnessing the world through a child’s eye is often a privilege, adults take for granted. As adults, we need to listen more actively. We need to do better for our health and our planet and gain the trust of the children who feel we are not doing enough.”

During the discussion, she dedicated a message to the policymakers, in which she noted that all research clearly indicated the extent children were thinking about these global challenges. She added that long-term planning and implementation were key in ensuring the future of all generations as well as reducing the burden on children.

Additionally, underscored the fact that initiatives such as the reduction of single-use plastic that began in Maldivian schools have now moved “beyond the classroom and into national policy”.

The First Lady also spoke on ways to strengthen female voices, their engagement and leadership at all levels of climate action and advocacy. She stated that discussions that take place with women adequately represented at policy tables were “more reflective and of our society and led to more sustainable policy solutions”.

In addition to the First Lady, several high-level speakers representing different countries and organizations took part in this panel discussion.