Yameen: Will put forth PPM candidate for Kurendhoo seat 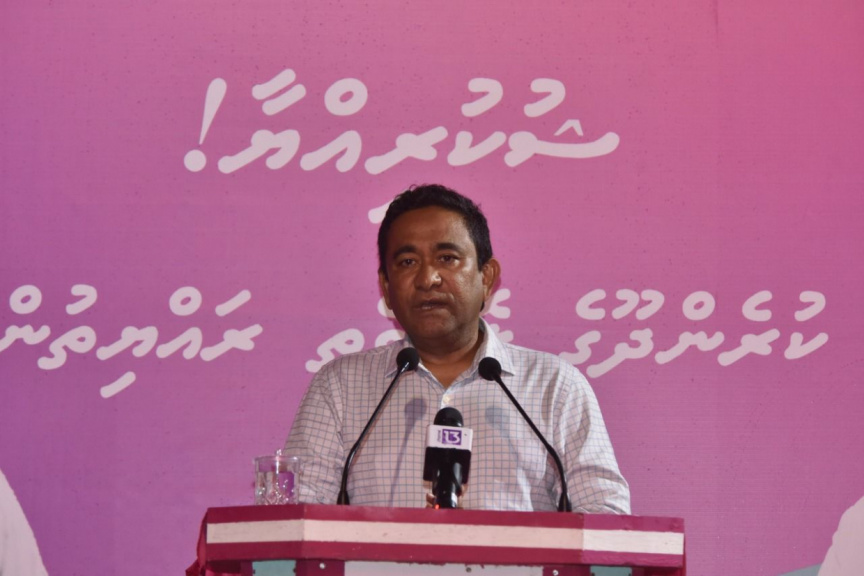 Former President Abdulla Yameen Abdul Gayoom on Tuesday said that a candidate from the Progressive Party of Maldives (PPM) will contest and win the Parliament’s Kurendhoo seat.

He made these remarks while speaking at the celebratory gathering held at Kurendhoo to mark PPM winning the seat of island council President, in the recent by-elections.

Speaking further on the topic, Yameen said the Kurendhoo seat was now vacant. He added that just as the island came together for the council by-elections, displaying similar unity, they will win the Parliament seat for the island as well.

Moreover, Yameen claimed that PPM lost the Komandoo constituency’s by-election due to the devious schemes of the government, and had they not influenced the election, the party would have won by a great margin.

In addition to this, Yameen said that the year 2023 was “PPM’s year”, and he’s come to know that it is the hope of Maldivians as well, after visiting the islands.

He noted that people come and share their concerns with him and PPM’s team when they visit islands just as they do when a president visits.

Furthermore, Yameen said PPM has two main reasons to contest the elections. The first was to win the election, and the second was to prevent Maldivian Democratic Party (MDP) from winning.

He stated that as soon as MDP wins an election, they begin their autocratic rule, the consequences of which have to be suffered by the people.

Yameen’s remarks about the Parliament seat of Komandoo comes at a time when High Court maintained a sentence by Civil Court ordering the current member MP Abdul Ghanee Abdul Hakeem to pay almost half a million Rufiyaa to Alia Investment.

In 2019, after Alia Investment filed a court case to get MVR 455,368 owed to them by Abdul Ghanee’s Log Wood Maldives, the Civil Court ordered him to pay the amount along with the lawyer’s expenses. This totals the amount due to MVR 523,673.

As per the constitution, “a sitting member will be disqualified if the member has a decreed debt which is not being paid as provided in the judgement.”

Supreme Court will be the authority to make a final decision on the matter.