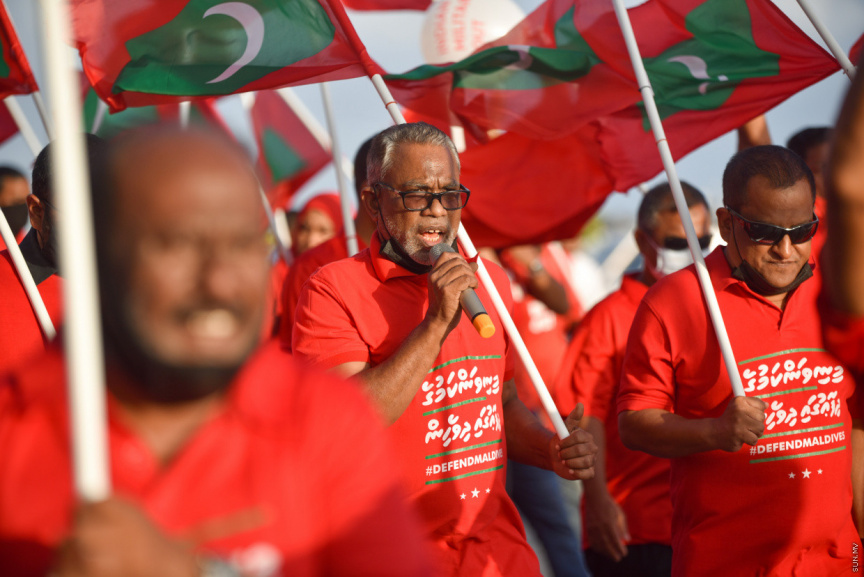 Speaking to the press amidst the rally, Adhurey said that the opposition’s mass rally was impeded by the police on an unlawful order.

“The people, did not by any means, get out to bring down the government. What we are all concerned about is the presence of Indian military personnel in the country, nothing else. To raise voice against this,” he had said.

Adhurey has alleged that Indian military personnel had been involved in impending today’s rally.

Stressing that this is proof of how slaved the Maldives has become – Adhurey said that local police and military are presently commanded by Indian military and the Indian government.

He added that all citizens need to take to the roads in order to stop the situation from deteriorating any further.

Police have yet to make a statement regarding the allegations raised by the Adhurey.

Spearheaded by Yameen, ‘India Out’ campaign – which calls for the removal of Indian military personnel from the country – has gained significant momentum across the Maldives recently. Events have been held under the campaign at different islands across the nation – whilst a mass rally took place in the capital this evening.

‘Neyva Holhiah’ mass rally at Male’ City this evening as part of the ‘India Out’ campaign was held despite warnings by the police against holding it.

A Police Spokesperson said that 11 individuals were arrested from the rally over obstruction of justice.

Guraidhoo MP Ghassan Maumoon, Maavah MP Mohamed Saeed and former Hoarafushi MP Mohamed Ismail are also among those who have been arrested.

Adhurey: Imprisoned is not Yameen, but Maldivians’ hope

'Will undertake all possible efforts to save Yameen'

PNC leader: Govt. will not allow ACC probe of Nahula

'Those who worked to elect this govt. are enemies'