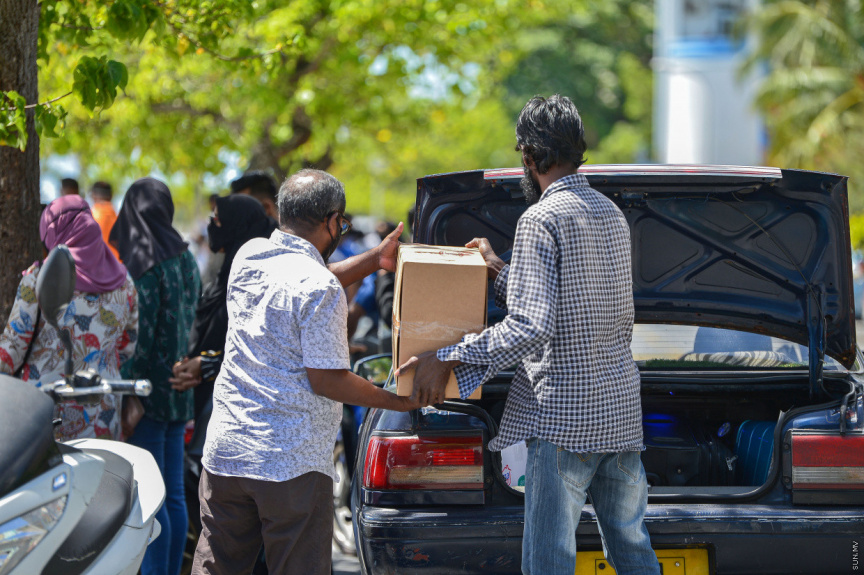 A passenger loads a cardboard box into the trunk of a taxi. (File Photo/Sun)

Taxi drivers in the Maldivian capital say that they will be left with two choices if the Transport Ministry fails to make a decision regarding the taxi fare by Thursday, either they will increase the fare themselves, or stop providing taxi services, even if temporarily.

Taxi centers are demanding an increase in taxi fares, citing the rise in cost of fuel and other commodities.

They presented their demands, along with the proposed new taxi fares, to the Transport Ministry on Monday.

Ahmed Shamaal, one of the representatives of taxi centers who went to present the demands on Monday, told Sun that they hoped the government would conduct necessary discussions and make a good decision by Thursday.

Shamaal himself believes that based on current regulations, authorities are within their rights to penalize taxi drivers found to be charging passengers higher than the current rates.

“But we aren’t here to be punished. We are here to advocate for our rights and to protect our rights. So, it is not within the mandate of the heads of the taxi centers involved, and other top figures within taxi centers, to allow the government the opportunity to take action against a driver or taxi center,” he said.

Shamaal said the decision of whether they would provide taxi services or not would be decided by the drivers themselves, but that they would not allow for any opportunity to take action against a driver.

“But this does not mean we are planning on challenging the government,” he said.

Shamaal said the option left for drivers to avoid punishment or fines was to stop or suspend their services.

He said that they found being forced to drive for unfair rates unacceptable.

Shamaal said that there was hope drivers would not be forced to choose any of the two options, and that a better way could be found through talks.

Following the ultimatum by taxi centers on Sunday, police issues a statement the next day, warning they would take action against taxis found to be imposing fares higher than the fares set by the government.