Minister Shauna: 26 percent of electricity provided to be solar powered at end of this term 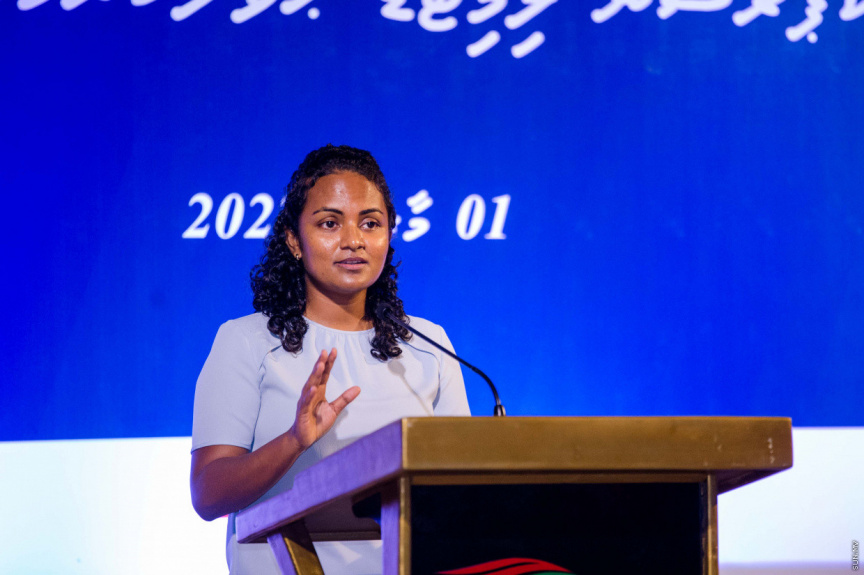 Environment Minister Aminath Shauna has stated that at the end of President Ibrahim Mohamed Solih’s administrative term, 26 percent of the electricity provided will be solar-powered.

Minister Shauna made the remark whilst speaking at the ceremony held at K. Huraa last night, to hand over the island’s powerhouse to Fenaka Corporation. Noting that the prices of electricity service were being closely monitored – she said that USD 400 million is spent from the state budget to acquire fuel.

“The expenditure on fuel adds up to about 10 percent of the Maldivian GDP,” she stressed.

Pointing out that one of the most important factors for the development of Maldives is to cut down the country’s dependency on fuel, Minister Shauna said that many efforts were underway in order to achieve this goal.

On this note, she highlighted that physical works on projects at over 100 islands were underway, for the establishment of home solar systems at those islands.

“By the time our term ends, about 26 percent of the electricity provided will be solar-powered,” she added.

Under this program which was inaugurated two months ago, the government aims to install solar panels on the roofs of 1000 houses by the end of this year.

“You all will experience the benefits of this. Your electricity bills can be cut down by about 90 percent,” she detailed.

Stressing that Maldives receives about 12 hours of sunlight per day, Minister Shauna stated that an increase in the amount of solar energy generated will decrease the price day by day.

She also noted that there were obstructions faced in the efforts to switch to renewable energy, but added that it is important to have commenced efforts.

Minister Shauna said that the fastest and easiest way for the public to achieve the government’s ‘net zero’ goals, is the installation of home solar systems.

Nasheed and 2 other parliamentarians to head to Malta