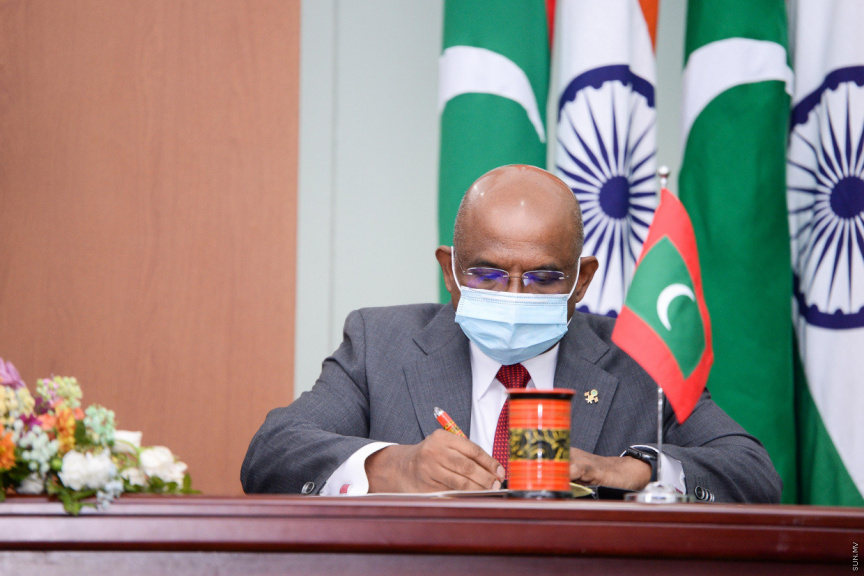 Maldivian Foreign Minister Abdulla Shahid at the signing of MOUs between Maldives and India on November 9, 2020. (Sun Photo/Fayaz Moosa)

Maldivian government said on Wednesday that it strongly rejects attempts to spread false information through media and across social media platforms, using the “India Out” slogan, alleging that bilateral cooperation between Maldives and India undermines the national security and sovereignty of Maldives.

In a statement on Wednesday morning, the Maldivian Foreign Ministry said that the bilateral relations between Maldives and all its international partners, including India, are based on principles of mutual respect and understanding, and in accordance with respective national and international law.

“Such interactions in the international sphere does not, and will not undermine the Maldives' independence, sovereignty, and territorial integrity. In fact, they are designed to enhance the Maldives’ national interests, and deliver for the people of the Maldives,” said the Foreign Ministry in its statement.

Foreign Ministry said that the Maldivian government believes the false allegations regarding Maldives-India relations are misguided and unsubstantiated, and do not reflect the views of the general public.

“The Government firmly believes that these views are not the sentiments of the general public, but rather that of a small group of individuals with the objective of tarnishing the country’s long-standing cordial ties with India,” reads the statement.

Foreign Ministry said that India has always been Maldives’ closest ally and trusted neighbor, and has extended constant and consistent support to the Maldivian people on all fronts.

“The cooperation and support provided by the Government of India, specifically on issues of maritime security, is aimed at strengthening the strategic partnership between the two countries and to ensure the safety and stability of the Indian Ocean region,” said the Foreign Ministry. “Support provided by India, on areas such as search and rescue capabilities, casualty evacuation, coastal surveillance, and maritime reconnaissance, directly benefit the Maldivian people.”

Foreign Ministry said that Maldives has also established partnerships with other countries in similar areas of cooperation, to enhance technical and strategic capacities.

Foreign Ministry said that addressing the ever-growing threats of trans-border terrorism, piracy, narco-trafficking, as well as non-traditional security threats such as climate change, cyber security and human trafficking, requires the support and cooperation of all regional and international partners.

“No one country alone can address these issues on its own,” said the Foreign Ministry.

“The Government of Maldives urges all parties to act responsibly, and refrain from spreading false information that undermines the country’s relations with its neighbors, and the international community. The Government urges media outlets to fully commit to professional standards of journalism in reporting such information,” reads the statement.

The Maldivian government thanked India for its assistance to Maldives over the years, especially, on instances such as the 1988 mercenary attack on the country, the 2004 Tsunami, the 2015 Male’ water crisis, and during the ongoing COVID-19 pandemic.

“India will always remain a true and a trusted friend of the people of the Maldives,” said the Foreign Ministry in its statement.

The ‘India Out’ slogan is used by the opposition coalition composed of PPM and PNC to protest against the presence of Indian military personnel in Maldives. Anti-Indian sentiments were expressed during the opposition’s rally in the Maldivian capital last Friday – which was covered by top international news agency Al Jazeera.