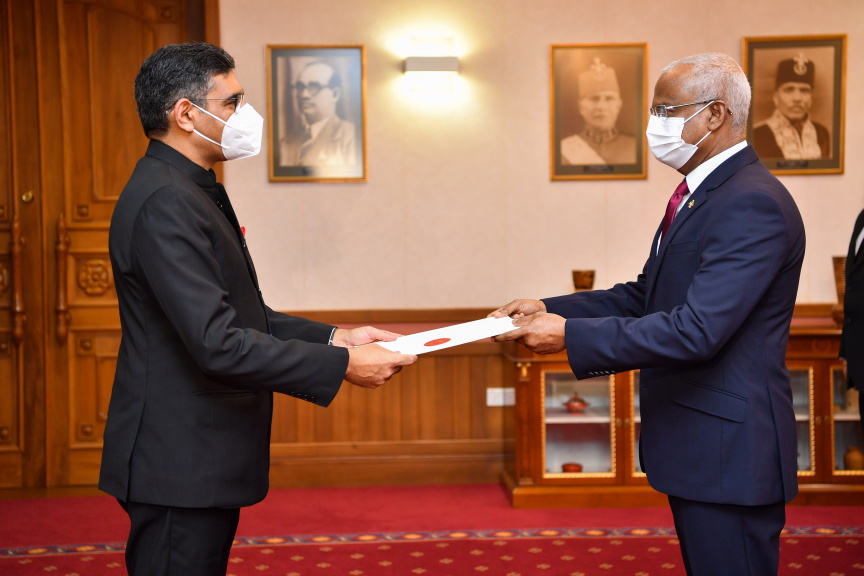 The newly appointed Indian High Commissioner to the Maldives, Munu Mahawar, has presented his credentials to President Ibrahim Mohamed Solih.

The credentials were presented during a special ceremony held at the President's Office on Wednesday afternoon. Following the ceremony, President Solih and High Commissioner Mahawar sat down to discuss further strengthening Maldives-India relations.

At this meeting, President Solih also welcomed the new High Commissioner to the Maldives, and congratulated him on his appointment.

High Commissioner Mahawar also congratulated the incumbent government on its achievements within the past three years, particularly highlighting the efforts to curb the spread of COVID-19 in the country in addition to the numerous strives in the recovery of the Maldivian economy post-pandemic.

Speaking of the close bilateral relations enjoyed between Maldives and India – President Solih stressed that it is a special relationship, whereas no third nation can take India’s place.

The two expressed their desire to further cooperation and assistance in all efforts towards the mutual benefit of both countries. They also agreed on further strengthening relations in areas of mutual interest including socio-economic development, human resource development, security cooperation, and climate change.

President Solih also stressed that climate change is one most pressing issues for the Maldives – adding that the country will continue to advocate for more ambitious climate commitments. On this note, he commended India’s Prime Minister Narendra Modu for his commitment at COP26 summit, pledging to cut its emissions to net-zero by 2070.

Prior to the appointment of Munu Mahawar, the post of High Commissioner of India to the Maldives was being gilled by Sunjay Sudhir. Bilateral relations between Maldives and India flourished during his term as well, with Maldives being the first country to receive the Covishied vaccine produced in India.