Mahmood’s Murder: Migrant worker made to reenact his actions 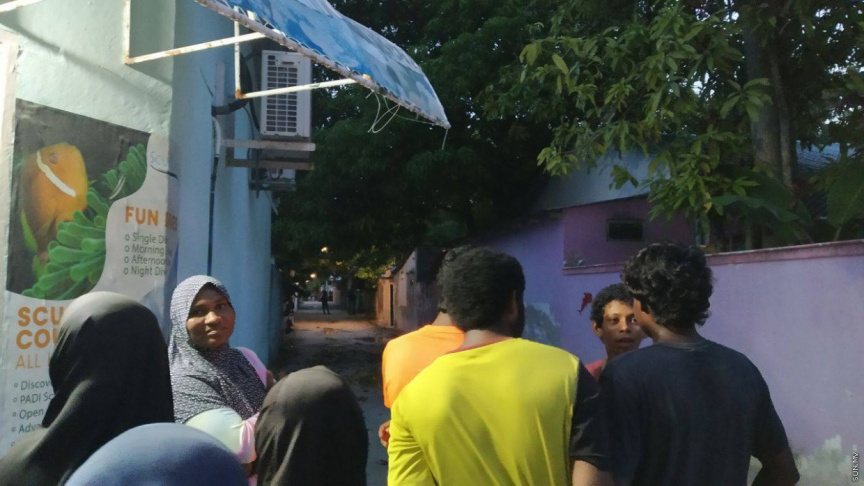 Saalim, the migrant worker who was arrested under suspicion of the murder of local businessman – Mahmood Aboobakuru – at ADh. Dhangethi, has been made to reenact his actions by the Police.

A Dhangethi resident who spoke to Sun today said that the Police had taken Saalim to multiple locations today – including Nedhunge, the house he was living in and also Bilehge, the abandoned house at which Mahmood’s body was found.

Saalim resides at Nedhunge, where he works as live-in caregiver for an elderly man, Adambe. They are the only occupants of the house. Nedhunge is located behind Bilehge, the abandoned house at which Mahmood’s body was found. There apart by a distance of approximately 100 meters.

Saalim was arrested yesterday, after the Police conducted a search at Nedhunge. When presented before the Court – he has been remanded in police custody for 15 days, as the investigation against him continues.

Police had taken Saalim to Nedhunge, under their custody, sometime this afternoon. Islanders who witnessed the scene reported that the Police had a shovel and a rake inside the house as well.

“The Police did take that foreigner to the well in which Maahmood’s body was found. They stood near the house he lives in for a very long time too. They were talking – seemingly in a way that something was being explained,” a witness had said.

The witness also said that Saalim had reenacted how he had climbed over Nedhunge’s wall to the Police.

According to the witness, Police, along with Saalim, are still presently inside Nedhunge. The witness also added that the Police were carrying around lights and spades inside the house.

“People have crowded the area. The Police did get in and out of the house about twice with Saalim. Then they went inside with some lights. Also some spades. It is very lit now. It is most likely that they are going to dig something now,” the witness recalled the events.

In addition to the reenactment at the house – the Police have seized items from Nedhunge as well.

A Dhangethi resident who spoke to Sun said that a police vehicle had arrived near Nedhunge twice since Saalim was brought there – and on these two occasions, something from inside the house was loaded in the vehicle.

“The Police vehicle was parked near the house. Officers completely surrounded the area before they took whatever they took out of the house. Some people said it was a sack. Others said it was a box. Not sure,” the resident had said.

Police have yet to reveal the connection between Saalim and Mahmood’s murder to the public.

Mahmood was found murdered during a search for him – after having been declared missing. He was last seen alive on Wednesday night. Dhangethi residents commenced an island-wide search at 10:00 am on Thursday morning. His body was discovered during the search at around 15:15 in the afternoon – inside a water well at an abandoned house; bound and stuffed inside a sack.

Shortly after he was found murdered, residents took the law into their own hands to hand over two men who they believed to the murderers to the police. Subsequently, the two men were granted police protection.

Later, a woman who is linked to the two individuals was also granted police protection.

Although they were not under arrest initially – the Police later on confirmed that they were arrested in connection to a separate case.

Following this, the three were escorted out of Dhangethi on Friday – under protective custody of the Police. No evidence has been uncovered linking the three to Mahmood’s murder as of yet.

In a surprising turn of events, Police announced Saalim’s arrest in connection to Mahmood’s murder on Saturday.

In this regard, the resident detailed that a woman who was passing by Nedhunge during that night – had peeked inside upon hearing what it sounded like to be a human scream. When she had peeked – she saw what she thought to have been something being dragged, but as it was really dark, she is unsure of what she exactly saw. The police search was prompted when the woman had come forward to the Police.

The police have also taken the vandalize motorbike owned by the two individuals accused by the public in Mahmood’s murder into their custody.

The motorbike was lit of fire by Dhangethi residents in a fit of rage – three days ago after Mahmood’s body was discovered.

A Dhangethi resident who spoke to Sun said that the vandalized motorbike had remained at the location it was lit at – even during dusk today. Hence, the resident stressed that it must not have been long since the Police had taken the motorbike into custody.

The motorbike was taken to Dhangethi Police Station. It is speculated to have been taken into custody in order for the investigation.