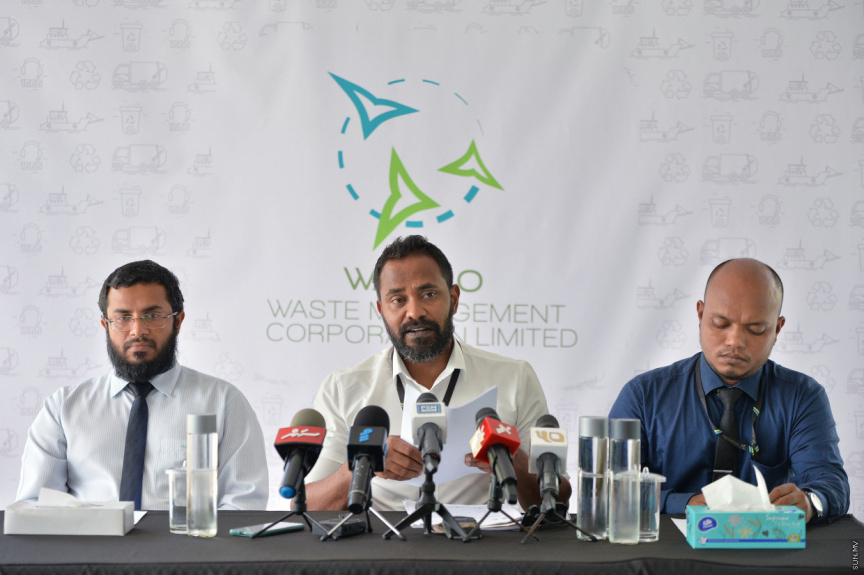 “If we were to talk about the city council, the latest records show the city council owes WAMCO MVR 30.5 million. But our financial transactions are very good,” he said.

Haleem added that there are nearly 16,000 households in Male’ registered with WAMCO, but only a few regularly pay bills.

WAMCO said it will be forced to discontinue services if customers fail to pay their bills.

But the current situation means WAMCO will have to discontinue waste collection services to 12,000 households, he said.

At Thursday’s press conference, WAMCO also responded to questions regarding criticism by Male’ City Council, which has accused the corporation of failure to manage waste in the capital as stipulated in their agreement with the council.

WAMCO’s Managing Director Adam Mohamed said he doesn’t believe it important to respond to comments by the council.

“But there are many things that are confusing,” he said.

Adam said the city council does not have the authority to instruct WAMCO to undertake any work outside of the agreement.

He added that WAMCO has extended the registration period to until the end of this September. He urged all households to register with the corporation as soon as possible.

“This corporation does not want anyone to keep waste out in the streets. There are many reasons for this. Not event 50 percent of the households in the Male’ area are registered. This is a sad matter, truly,” he said.

Adam said WAMCO will keep a booth in order to facilitate registrations, and are also working on introducing online registration via the corporation’s website.

WAMCO provided assurance of its dedication to providing good services to the people, and asked for the public’s cooperation.

Police officer arrested for sexual abuse of a minor