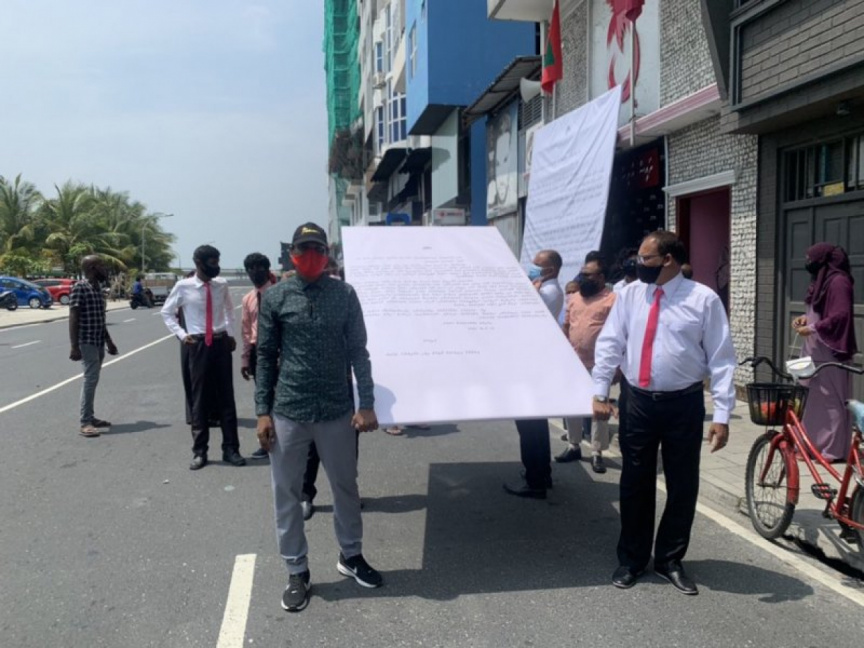 Progressive coalition members on their way to deliver a giant version of the letter sent to the President's Office calling to disclose the UTF agreement on March 23, 2021.

The Opposition Progressive Coalition has sent a letter to the President’s Office calling to disclose the agreement made with India for the development of the Uthuru Thila Falhu dockyard.

The agreement has caused public controversy with many calling for the disclosure of the document amidst rumors that the agreement favored India.

The letter read that every time MDP gained power, the party committed acts that threaten the sovereignty and independence of the nation and that agreements signed with foreign companies and foreign nations were extremely concerning to the public.

The letter also reminded the President of his pledges when he said that he would defend the nation. The letter read that the signing of unknown and shady agreements with India caused a lot of concern for the public.

Also, the letter noted other instances of agreements made with India such as the Helicopter agreement, Dornier Surveillance flight agreement, Radar Installation agreements, Hydrographic survey agreements as well, before calling to disclose the agreement for the benefit of public peace.

Opposition parties have previously claimed that the agreements for the Dornier aircraft, UTF allowed India to station armed military personnel of the nation in the Maldives, something that the Maldivian government has denied.

MNDF has also refused to disclose the UTF agreement based on national security reasons.