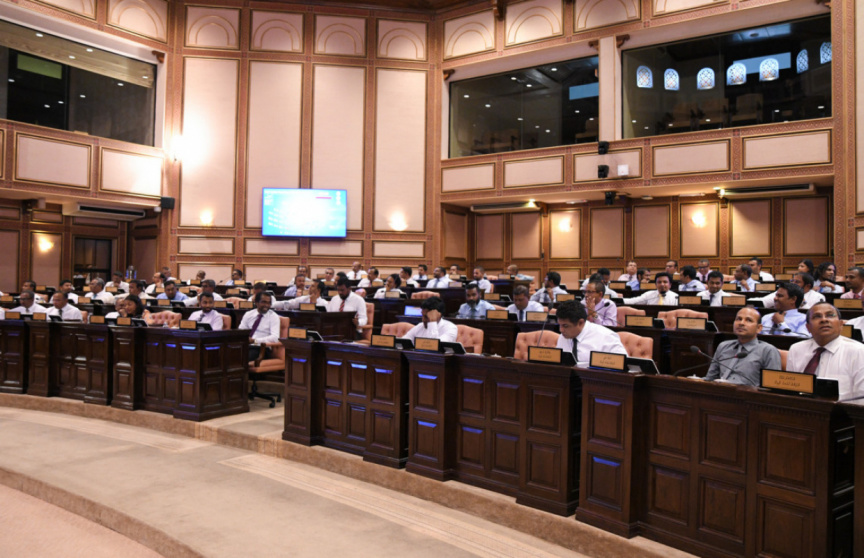 Some of the parliamentarians criticized the police on Monday, accusing the law enforcement agency of failure to provide proper protection to citizens.

The criticism was voiced during a debate on an emergency motion submitted by Central Henveiru MP Ali Azim to draw the attention of relevant state institutions towards the repeated acts of vandalism targeting a taxi driven by female taxi driver Aminath Waheeda.

Debating on the motion, Ali Azim said he doesn’t believe the police are providing sufficient protection to the people, despite having the “protect and serve” motto sewn into their uniforms.

He said that the failure to investigate the acts of harassment and vandalism against Aminath Waheeda, despite it being reported to the police on five different occasions, poses an issue of great concern.

“The heads of the police institution need to acknowledge that a problem lies with the institution. This problem is that they need to gain the public’s confidence in the institution as one which resolves issues and works to the satisfaction of the people,” he said.

Ali Azim described failure to investigate robberies and various crimes in Male’ as an issue of great concern.

Deputy Speaker, North Galolhu MP Eva Abdulla said that the reason for the failure to investigate the attacks against Aminath Waheeda on five different occasions needs to be investigated by the National Integrity Commission.

“This is a huge issue when the suspect remains on the loose after attacking a woman five times, when he is released due to lack of evidence each time. This person needs to be captured. And the National Integrity Commission needs to look into why the police institution isn’t getting this done,” she said.

Addu Meedhoo MP Rozaina Adam said she fails to accept the assertion there isn’t any evidence when Aminath Waheeda is stopped and attacked while she is driving her taxi.

She said that having “people who find it okay to hit women” investigate cases will not result in a positive outcome.

“Why isn’t this case being investigated when these attacks are coming from her former husband? There is no reason for the lack of action in response to this at this point,” said Rozaina.

She said that the greatest issue lies with having people who fail to treat sexual violence and domestic violence as serious offenses as investigators.

Ali Azim, in his emergency motion, said that Aminath Waheeda is facing repeated harassment and vandalism, hindering her ability to earn an income.

“In light of this situation where she faces serious damages, I express deep concern and call for an investigation and for the persons causing these damages to be brought to justice,” wrote Ali Azim in his emergency motion.

It also calls for support for working women.