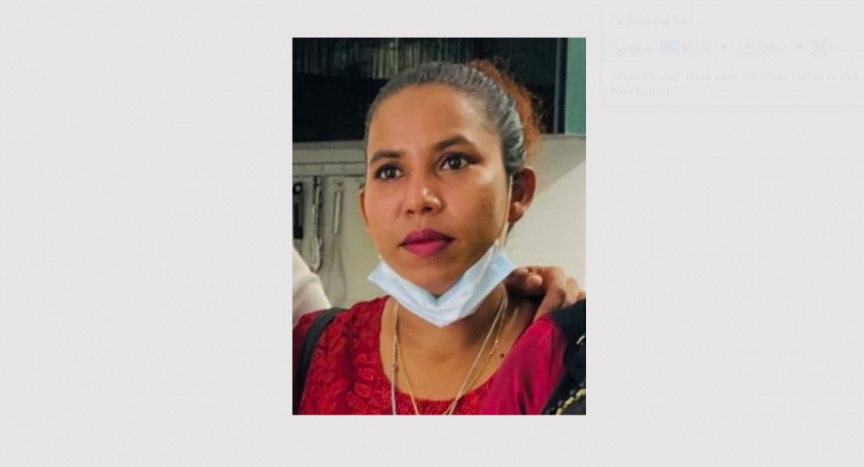 The family of the woman who was reported as a missing person from Male' over the last weekend said on Monday that she was held captive, beaten, and robbed of MVR 25,000.

Shirumeena Aboobakr, 33, Luxury, R. Kinolhas, was reported missing to the police on Saturday, October 31. The police publicly announced her as a missing person on Sunday, but later reported that she had returned home earlier this Monday.

A family member told Sun that Shirumeena was held captive and severely beaten.

“She has cuts from a box cutter on her two hands. There are marks where her hands and feet were tied. She was hit in the face. She has injuries on her back,” said the family member.

The family member said that Shirumeena was held captive to rob her, and that the abductors threatened to kill her.

Shirumeena runs a private business in partnership with another member of her family.

Her family said she is severely traumatized and can barely speak.

“Sharumeena is severely mentally traumatized due to the abuse she suffered. She doesn’t know where she was taken to, or where she was taken out of. She returned home after she was released. The details remain unclear as she can barely speak,” said the family member.

Sharumeena last had contact with a family member prior to her kidnapping at approximately 01:15 pm on Saturday, when she had been on her way to a wholesale store to buy stock for her shop.

“She went missing when she went to buy stock. She went missing after she left shop after bringing in cigarettes she purchased from OCC. I last called my sister to ask if she had Fanta Orange at the shop, to buy Fanta Orange. There was no news after that,” said the family member.

The family member said that Sharumeena’s phone was switched off after that, but was switched on at approximately 11:00 pm on Sunday. The abductors texted the family stating she was “on my way back”.

Sharumeena has never been married or involved in a romantic relationship, said the family. Neither was she previously ever threatened.

The family suspects Sharumeena was targeted because she is a business owner.

The police were not immediately available for comment regarding the family’s claims.