Portal launched under pilot project to promote A. A. Atoll as a food destination 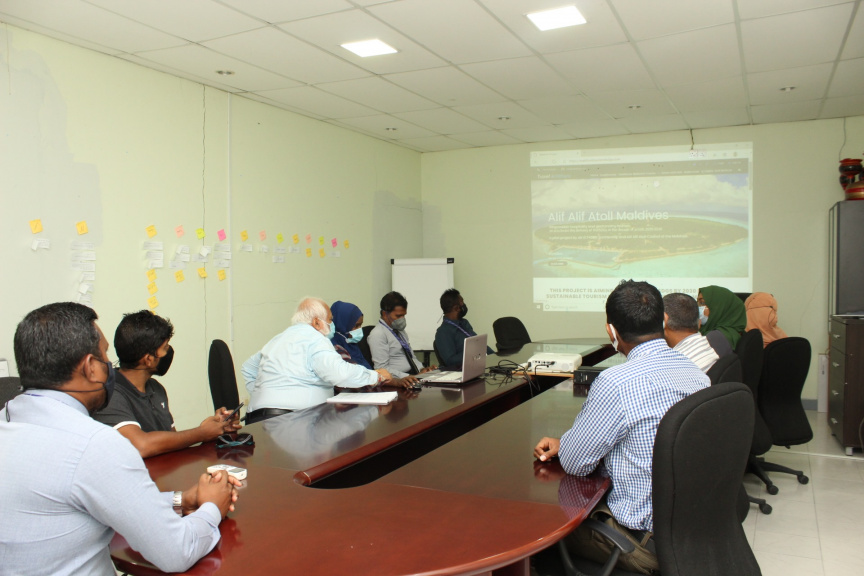 ICT4SIDS, a UN partnership dedicated to advancing Sustainable Development Goals in small and developing states through information and communication technology, is working in close collaboration with the A. A. Atoll Council on a pilot project to develop A. A. Atoll as Maldives’ first food destination.

ICT4SIDS and A. A. Atoll Council launched an experimental version of a web portal under the project on Thursday afternoon, designed to promote A. A. Atoll as a food destination worldwide.

The launch of the portal was designed to coincide with the reopening of guesthouses in residential islands in Maldives for international tourists.

The project is spearheaded by Vittorio Coco, an Italian national and the ICT4SIDS Regional Director for South Asia.

He is also the founder of community group Marhaba Ekuverin - Maldives Italy Friendship Society, which aims to foster connectivity between Maldivians and Italians.

“The portal introduces new ideas and technologies that will benefit the guesthouse owners of the eight islands of Alif Alif Atoll and their communities, enhancing the concept of responsible hospitality to include social and cultural activities related to food and rural development in the local islands,” said Coco, who has been staying in A. A. Rasdhoo since March.

According to Coco, the portal was inspired by the United Nations World Tourism Organization (UNWTO) platform, www.tourism4sdgs.com, which advocates tourism as a driver to achieve the 17 Sustainable Development Goals of the 2030 Agenda.

He said the portal will provide stakeholders a chance to connect post-COVID-19 tourism recovery to the Decade of Action declared by the UN Secretary-General Antonio Guterres, by adopting the framework of gastronomy tourism and rural development to achieve innovative targets.

The portal lists more than 70 guesthouses operating in the residential islands of A. A. Atoll.

Coco said the guesthouses are well aware of the stakes and open to playing a critical role in the marketing strategy selected by ICT4SIDS to make A. A. Atoll the first food destination in Maldives.

“THE CONNECTION BETWEEN FOOD AND TOURISM IS UNDENIABLE”

ICT4SIDS has more projects planned for A. A. Atoll, which will combine food with tourism.

The connection between food and tourism, according to Coco, becomes clear in the proposed project for an Agrifood Incubator in Rasdhoo.

The Agrifood Incubator is to be built in Rasdhoo as a public structure with educational and demonstrative purposes, the centerpiece of a network of eight portable totem farms, a high-tech solution for food safety conceived by Vertical Farm Italia for producing high-quality vegetables and fruits inside a vertical container fully run by a computerized system, installed in each island and managed by female-led social enterprise tutored by Confagricoltura Donna from Italy.

“The production of healthy and nutritional food in these vertical farms will provide the raw material to local cooks to revive traditional Dhivehi recipes and to experiment nouvelle Dhivehi cuisine, offering a new appealing experience for foodies and attracting new visitors to the local islands,” said Coco.

He said that it will also create new jobs for youth and women, creating a strong bridge between the past and the future of island communities.

“The project stands very consistent with our mission because it aims to comply with the SDG 5 on gender equality and SDG 12 about responsible production and consumption. It even takes action to combat climate change, SDG 13, because these portable farms will be saving small islands from deforestation and soil degradation to say the least,” said Coco.

Another equally ambitious proposal brought forth by ICT4SIDS will aim to create island farmhouses, a combination of greenhouses and guesthouses, in uninhabited islands selected by the government for agricultural projects.

The proposed project aims to combine the core agricultural purpose with a tourism component, consisting of a small cluster of overwater units integrated with totem farms installed in the uninhabited islands for self-sufficient food production and satisfaction of guests.

“The units of the project designed by a famous Italian architect could be owned individually by Maldivian guesthouse owners or small medium entrepreneurs by taking advantage of a financial scheme provided, under condition of positive financial due diligence, by the Italian Export Credit Agency. The scheme is under study by the experts and could bring in Maldives for the first time a kind of condominium formula in a mini resort-looking like complex of 10/20 self-sufficient units over waters,” said Coco, who has a captivating name for the project: AgriBlue Tourism - the Island Farmhouses of Alif Alif Atoll.

Tourist found dead in the waters off Madivaru Finolhu