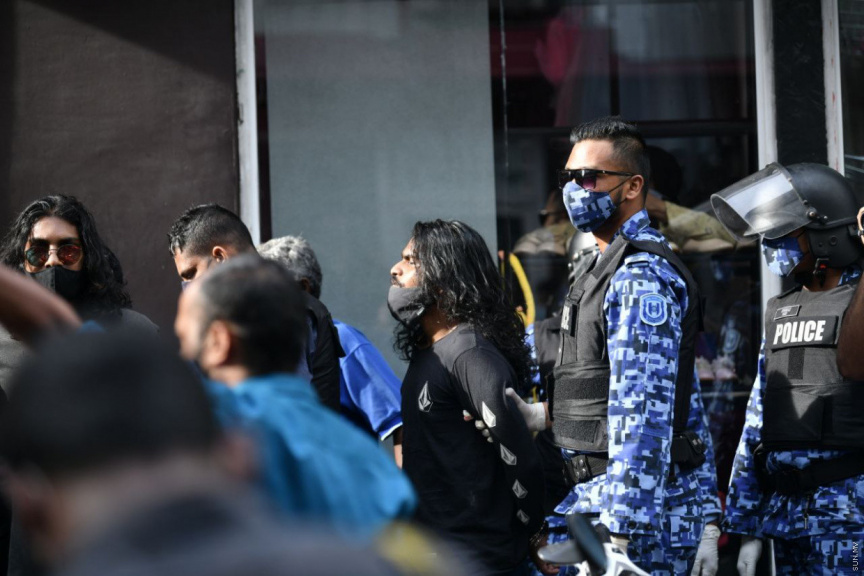 The opposition coalition, composed of PPM and PNC, said that the violation of Health Protection Agency (HPA)’s guidelines during a rally which took place in Male’ City on Saturday took place due to police interference.

The police stopped the rally, and took 41 people into custody.

In a statement condemning the arrests, the opposition coalition said the gathering was a “peaceful motorcycle rally organized by the youth”, and planned in accordance with HPA’s guidelines.

They alleged that it had been police intervention which led to violation of the health safety guidelines.

“It’s concerning that the standards were violated due to the actions of the police in arresting the young people who were there peacefully,” said the opposition coalition in their statement.

The opposition coalition said that they had been informed that those arrested included a large number of women, and called for everyone to be granted unconditional release.

The opposition coalition also called on the government not to stop “protests by citizens against enslavement of Maldives”, and to stop obstructing the constitutional right to freedom of assembly and freedom of expression.

The police said that the 41 arrests during the rally were made “for gathering in public in violation of HPA’s guidelines and putting the safety of the community at risk amid the state of public health emergency” declared in Maldives over the coronavirus pandemic.

HPA has prohibited public gatherings of more than five people during the state of public health emergency.

Protesters had initially attempted to hold a motorcycle rally. They later continued on foot when the police intervened, but were eventually dispersed by the police.

The rally had come after the police issued a statement warning legal action against organizers and participants of public gatherings held in violation of HPA’s guidelines earlier this Saturday.

The motorcycle rally this Saturday follows a similar rally held by the opposition coalition on August 28, at the aftermath of which PPM and PNC were each fined MVR 75,000 by Elections Commission (EC) in August for “repeated violation of Political Parties Act, Freedom of Assembly Act, and guidelines issued by HPA under the Public Health Act.”