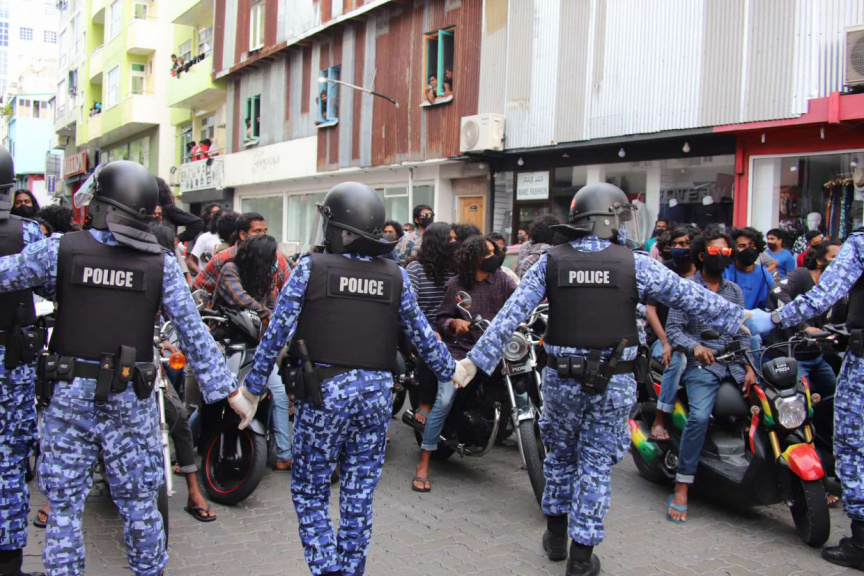 The police dispersed a motorcycle rally held in violation of health safety guidelines in Male’ City on Saturday, arresting 41 people.

The police confirmed on Saturday evening that 41 people were taken into custody, “for gathering in public in violation of HPA’s guidelines and putting the safety of the community at risk amid the state of public health emergency” declared in Maldives over the coronavirus pandemic

PPM spokesperson Heena Waleed told Sun that those arrested by the police do not include any members of the PPM-PNC leadership.

The rally, which began from the Maafannu district-end of Majeedhee Magu, was promoted as a “motorcycle rally of the youth”.

PNC leader Abdul Raheem said that the opposition politicians attended the rally not as politicians, but as “regular Maldivian citizens.”

“We aren’t here with a political agenda. We are taking part in a motorcycle rally held by the youth to protest against selling this country to India,” he said.

After the police stopped the motorcycle rally by towing away the vehicles and making arrests, participants attempted to continue with the rally on foot, but were eventually dispersed by the police.

The rally had come after the police issued a statement warning legal action against organizers and participants of public gatherings held in violation of HPA’s guidelines earlier this Saturday.

The motorcycle rally this Saturday follows a similar rally held by the opposition coalition on August 28, at the aftermath of which PPM and PNC were each fined MVR 75,000 by Elections Commission (EC) in August for “repeated violation of Political Parties Act, Freedom of Assembly Act, and guidelines issued by HPA under the Public Health Act.”