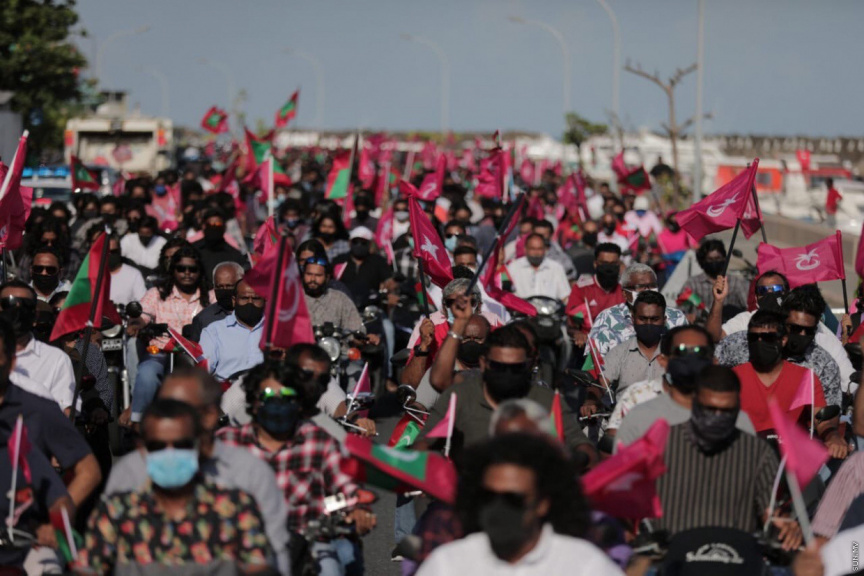 Motorcycle rally held by the PPM-PNC coalition in Male' City on August 28, 2020. (Photo/PPM)

Maldives Police Service has warned action against organizers and participants of public gatherings held in violation of health safety guidelines issued by Health Protection Agency (HPA) amid the state of public health emergency declared in the country over the coronavirus pandemic.

In a statement on Saturday afternoon, the police said they have received information of plans to hold gatherings in violation of the order issued by the Director General of Public Health regarding public gatherings.

The police have appealed to the people to prioritize public health safety in light of the situation, and adhere to HPA’s guidelines.

“Legal action will be taken against those who organize and participate in gatherings in violation of HPA’s guidelines,” warned the police in their statement.

The warning comes after PPM and PNC, which form the opposition coalition, were each fined MVR 75,000 by Elections Commission (EC) in August for “repeated violation of Political Parties Act, Freedom of Assembly Act, and guidelines issued by HPA under the Public Health Act.”

It had come after the coalition held a motorcycle rally in Male’ City in violation of HPA’s guideline regarding limited public gatherings and masks.

The new police warning comes with the coalition rumored to be planning to hold another motorcycle rally later this Saturday. PPM, however, has denied involvement in organizing the rally.