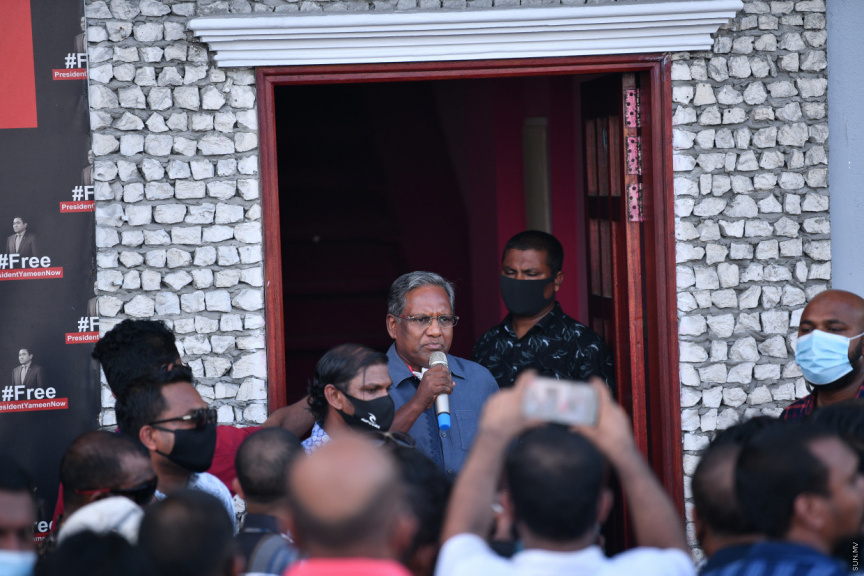 Former Maldivian President Dr. Mohamed Waheed Hassan Manik has been fined MVR 1,000 for his involvement in a motorcycle rally by the opposition PPM-PNC coalition in Male’ City in August, held in violation of safety guidelines issued by Health Protection Agency (HPA) under the Public Health Act to curb the coronavirus outbreak.

Waheed, who serves as special advisor to the PPM-PNC coalition, was brought in by the police in connection to the case earlier this Tuesday.

Waheed’s legal representative, Mohamed Raib confirms the police have imposed a MVR 1,000 fine on Waheed in connection to the case.

Raib said Waheed denied the allegations that he violated HPA’s guidelines, and told the police he had only taken off his mask while inside the PPM headquarters, and had kept his mask on when outside with the participants of the rally.

Raib alleges the police are biased in their treatment of Waheed, stating that the Parliament Speaker, former Maldivian President Mohamed Nasheed, who is the leader of MDP, had repeatedly violated HPA’s guidelines, but that the police never pursued any action against him.

“The Parliament Speaker has been seen on social media and news reports, wearing t-shirts and shorts, roaming around mask-less, in the streets, the beach, and wherever not. So they employ a different set of procedure when it comes to specific people,” he said.

Following the surge in coronavirus cases in the greater Male’ region, HPA has mandated that masks must be worn at all times in public locations in the city, and that public gatherings must be limited to maximum five people.

However, the PPM-PNC coalition held a motorcycle rally in Male’ on August 28, attracting a large crowd who later gathered in front of the PPM headquarters. Several participants of the rally, including top opposition politicians, were pictured with their masks down.

Waheed was caught on camera without his mask when he delivered his speech, and without appropriate physical distance between him and others.

Hoadedhoo: 2 COVID-19 patients to be moved to Vilingili