MVR 4 million in damages to café, money exchange in fire 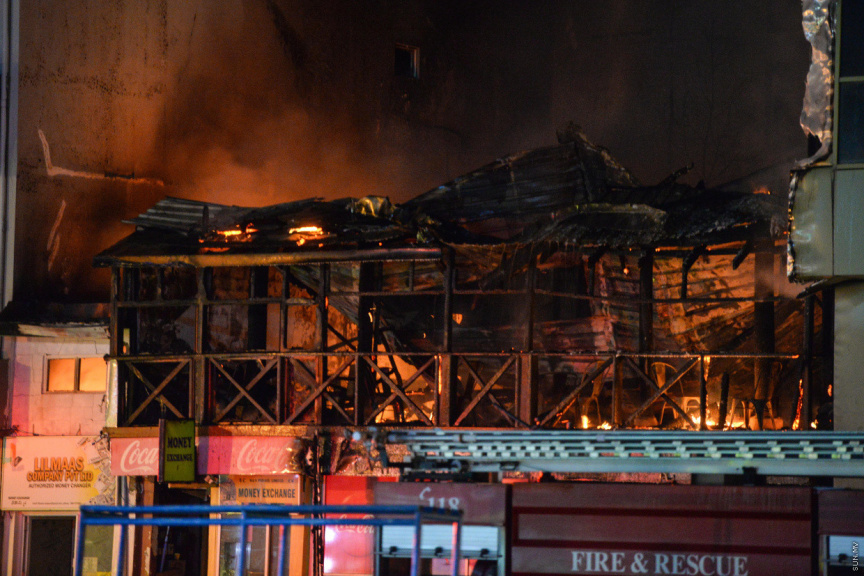 The fire in Henveiru district of Male’ resulted in over MVR 4 million in damages to the café where the fire originated from, and the money exchange located in the adjoining building, including MVR 500,000 in cash stored in the money exchange.

The fire, which erupted at approximately 09:45 pm on Friday, originated from a one-story building which houses Tiolo Café. The building was damaged beyond use in the fire.

The owner of Tiolo Café, Hassan Didi told Sun on Saturday evening that damages to the café in the fire is estimated to be approximately MVR 1.5 million.

He said the reason for the fire remains unclear.

“There wasn’t any cash there. But the damages to the equipment and property is estimated at approximately MVR 1.5 million,” he said.

Hassan said the café had been closed when the fire broke out, with only one worker stationed on night duty.

He said that the worker had been at the kitchen located in the first floor when the fire broke out on the ground floor.

“We can’t understand how the fire broke out. The fire didn’t break out from the kitchen. The electricity to the upper floor was switched off. There wasn’t an electric short or a gas leak,” he said.

The fire also resulted in extensive damages to the money exchange managed by Lilimaas Company Private Limited, located next door.

A co-owner of the money exchange told Sun that the preliminary assessment point to over MVR 2.5 million in damages, including the cash which had been stored in the office, and property damage.

“MVR 500,000 in cash which had yet to be removed completely burned. This included foreign currency. And the damages to equipment and property is estimated to be above MVR 2.5 million,” he said.

He said that they had managed to safely remove some of the cash, but couldn’t get to the MVR 500,000 in time.

Some of the equipment which burned beyond repair includes three money counting machines.

While the fire did not result in injuries, it also spread to Gadhage’ Mohamed Fulhu Building, which houses State Bank of India (SBI) offices in Male’ and Ooredoo Maldives’ offices. Both SBI and Oordeoo Maldives have also reported heavy damages in the fire.