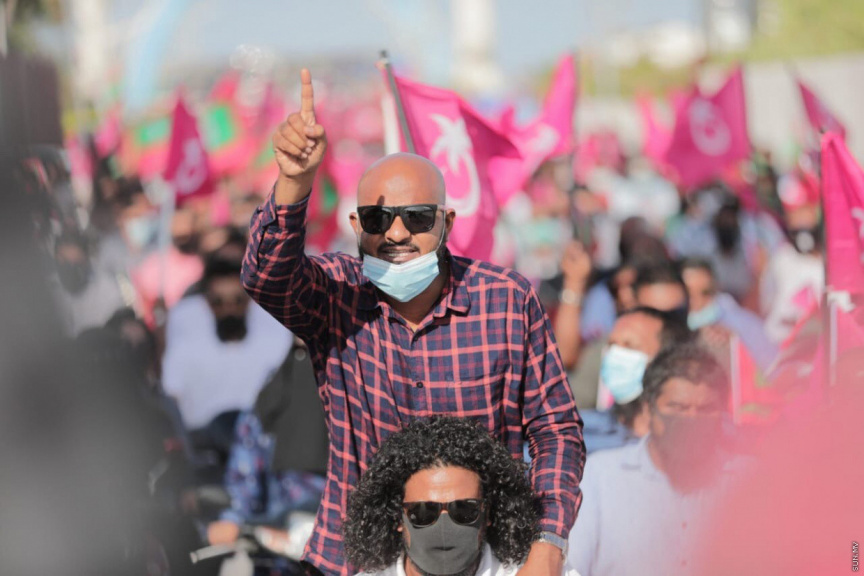 PNC deputy leader, former Baarah MP Ibrahim Shujau has been summoned to appear at the police headquarters for questioning over his involvement in a motorcycle rally held by the opposition in Male’ on Friday, during which many were found in violation of  HPA’s orders regarding wearing masks and maintaining social distancing.

The police, in a statement on Friday, stressed that the rally, organized by the opposition PPM-PNC coalition, was held in violation of HPA’s orders, and warned action.

A spokesperson from PPM said on Saturday that Shujau has received summons to present himself for questioning in connection to the rally.

He has been instructed to present himself to the police headquarters at 07:00 pm on Sunday.

Shujau was pictured during the rally with his mask pulled down, a violation of an order by HPA which requires masks to be worn at all times in public locations in the greater Male’ region – the epicenter of the coronavirus outbreak in Maldives.

Maldivian President Ibrahim Mohamed Solih criticized the decision to hold the rally on Friday, stating that he was sad to see leaders out in the streets organizing protests with Maldives recording more than 100 new cases on a daily basis.

HPA, in addition to ordering the use of masks and social distancing, has also ordered against holding all unnecessary public gatherings, and to limit gatherings to maximum 30 people where unavoidable.

The rally was held after police issued an appeal against holding protests amid the state of public health emergency, but they did not intervene to stop the rally.