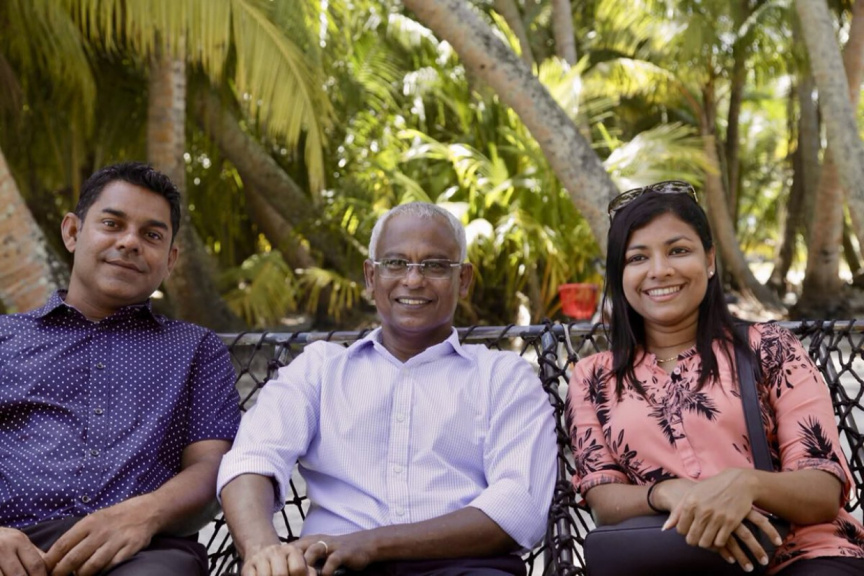 MP for Addu Meedhoo Rozaina Adam has backed President Ibrahim Mohamed Solih by pledging her full support for the President.

MP Rozaina was responding on Twitter to a post by MDP activist and musician Mohamed Majidh (Mezzo Mode) when she expressed her full support for the President.

A country cannot have two presidents, said MP Rozaina before adding that attempts for this can only lead to bad things.

“I am not trying to destroy the party. Someone as weak as me cannot destroy this party. That can only be done by higher-ups. Address that message to who it needs to reach. I am behind party leader President Ibrahim Mohamed Solih.” Said the MP as she indirectly targeted Speaker of the Parliament Mohamed Nasheed, who is the president of MDP.

Majidh then responded to Rozaina by saying that MDP was not awarded 65 seats in the parliament to destroy the party, to which MP Rozaina responded by saying that the seats were awarded to implement the manifesto of MDP easily.

“65 seats were awarded to stop the complication of things for President Solih by an opposition party inside the parliament. This is too much.” Said MP Rozaina on Twitter.

The MP also sent out more tweets regarding the topic later on where she noted that she had “worked for seven years, in the rain and the heat of the sun, for the benefit of MDP.”

“Some people think that MDP belongs to a specific person or family. If that is the case, MDP would not be registered as a political party at the Elections Commission. Every member of MDP has the same rights. Those rights will be utilized, no matter how angry it makes some.” Said MP Rozaina.

The indirect attack by MP Rozaina on Nasheed comes just a day after Nasheed and some members of MDP were revealed as attempting to gather signatures for a vote of no confidence against Economic Minister Fayyaz Ismail, who is seen as one of the most influential figures of the government.

Fayyaz had said that the news of the move had caught him by surprise.

99% of Tourism’s COVID-19 spending outside its mandate