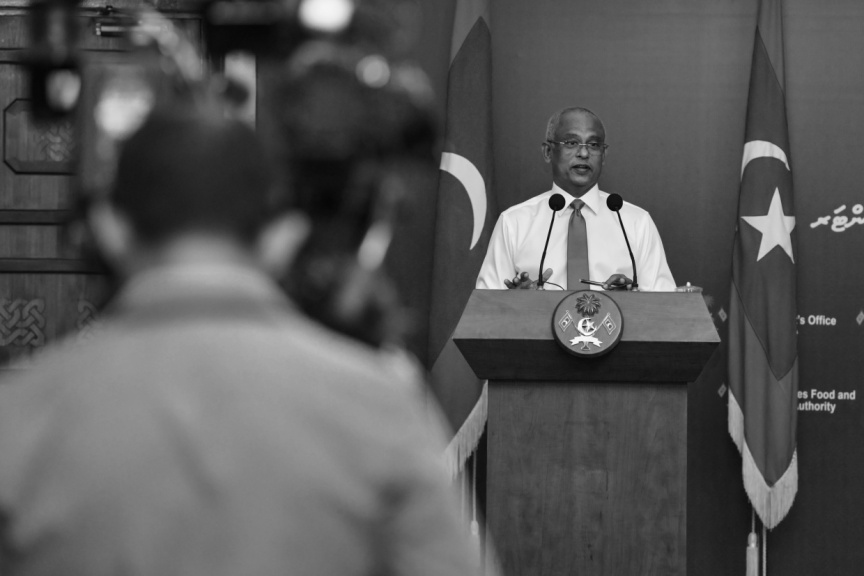 Maldivian President Ibrahim Mohamed Solih, on Monday, met with relevant stakeholders for discussions following a recent wave of protests and unrest among migrant populations in the country.

President’s Office issued a statement on Monday night announcing President Solih met with members of the National Security Council (NSC), along with the heads of relevant State institutions, for discussions in response to the cases.

According to the President’s Office, participants of the meeting counseled the President that unlawful protests, confrontations with the security services, and violent behavior which put the life and property of the public at risk poses a threat to the domestic stability and national security of the country.

The participants of the meeting decided not to allow for such violent and unlawful activities in the future, and to take all necessary measures to prevent such activities.

The meeting comes after two protests held by migrant workers over unpaid wages escalated into violence.

The first violent protest took place in Bodufinolhu, an island under development as a tourist resort in B. Atoll, on July 2.

The migrant workers in Bodufinolhu, employed by the project’s contractor, RIX Maldives, staged the protest after they were denied six months of wages. In the protest, some of the 203 disgruntled migrant workers at the island destroyed property and held local employees hostage.

The second violent protest took place in suburban Hulhumale’ earlier this Monday. The protest was staged by disgruntled migrant workers employed by Island Expert, the contractor for the housing project for security services in Hulhumale’.

The migrant workers have not been paid their wages since January, and had held peaceful protests last week, following which they were paid MVR 1,600 each, but continued to have their full wages withheld.

Their protest this Monday turned violent, when they threw bricks towards police officers who attended the scene, injuring several police officers and damaging police property.

Speaking during a ministerial questioning session at the Parliament on Monday, Economic Minister Fayyaz Ismail said the Maldivian government plans on repatriating some 20,000 undocumented migrant workers this year.

He said that while Maldives Immigration’s records place the number of undocumented migrant workers in the country at 62,000 – the actual figure is believed to be within the range of 80,000 to 100,000.

95 percent of undocumented migrant workers in Maldives are from neighboring Bangladesh.

43,000 undocumented migrant workers registered for the regularization program rolled out by the Economic Ministry last year.

Minister Fayyaz said that some 4,000 Bangladeshi workers have been repatriated to Bangladesh under the government’s voluntary repatriation program, out of which 3,800 workers are undocumented.