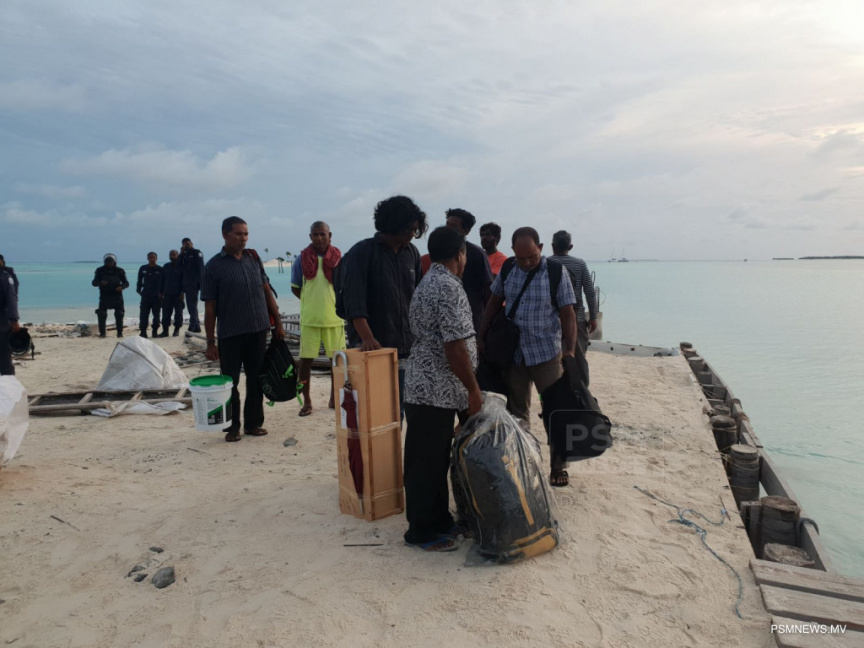 Photo shows locals rescued from the island of B. Bodufinolhu on July 3, 2020. They were taken hostage by a group of 200 migrants over unpaid wages. (Photo/PSM)

Officers from Maldives Services have managed to bring the situation in B. Bodufinolhu under control after a large group of expatriate workers took some locals hostage during protests yesterday.

A speedboat carrying officers from Male' City that departed around midnight last night, reached the island of Thulhaadhoo around 3:00.

Police arrived on the island around 6:30 in the morning. It was believed that there were 11 locals being kept hostage. No violence was reported from the scene and dialogue with the migrants eventually led to an end to the situation, said police around 7:31.

The locals taken hostage were not harmed and all are well.

Police are actively surveying the island. No arrests were made and police are still holding discussions with the expatriate workers who were protesting initially due to unpaid wages.

Commissioner of Police Mohamed Hameed also tweeted that "Police operation on B. Bodufinolhu island led by our Specialist Operations Department have successfully located and taken control of all 12 Maldivians who allegedly were held captive by disgruntled expatriate workers."

The Commissioner said that further investigation regarding the matter were underway.

The expatriates are reportedly from Sri Lanka, Bangladesh, and India.

The police investigative team on the scene consists of a team from the Human Trafficking department as well as the Serious and Organized Crime Department.

After standing down and surrendering their weapons, the expatriate workers are fully cooperating with police who are gathering information of the expatriates. Some are suspected to be victims of human trafficking.

Damage to vehicles and some infrastructure were noticed on the island.

Initial police attempts to land on the island were met with hostility by the expatriates who had "secured the island" and were armed with makeshift metal spears and rocks. A team of 50 officers could not land on the island during the initial attempt yesterday. An officer also suffered head injuries due to the violence.

MACL warns against groups at VIA due to COVID-19