President holds meeting with representatives from Voice of Children 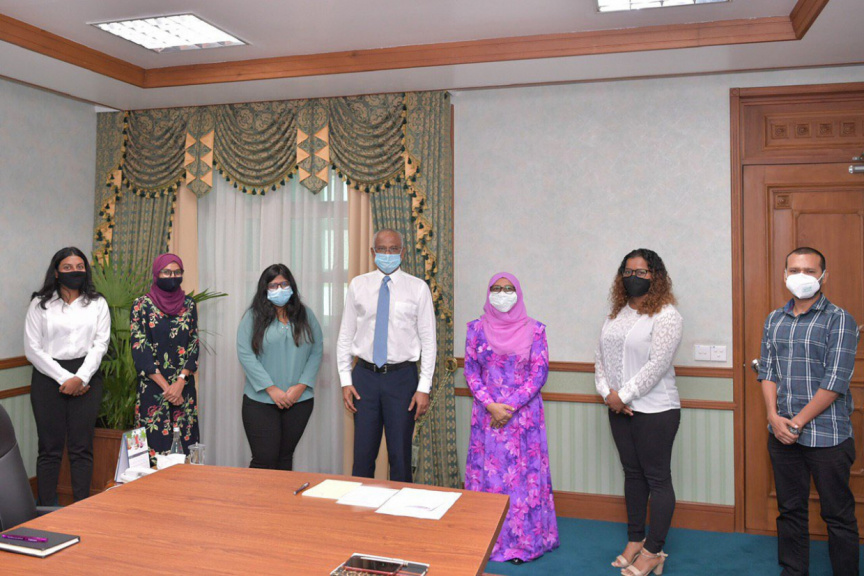 VOC was founded in the wake of the rape of a 20-month girl in southern Maldives, a crime which shocked the country and sparked a series of rallies across the country – which were suspended in face of the coronavirus pandemic. VOC recently recommenced its rallies in the capital, Male’ City and registered as a NGO late last June.

VOC’s founder Ikleela Hameed (Koo) told Sun that the meeting at the President’s Office this Sunday had been extended by the President himself.

She said that the President said he shared VOC’s concerns over crimes of sexual violence, and provided assurance that he considers the issue a matter of high priority.

“At the meeting, we expressed concern the increase in sexual violence, the lag in investigations, the lack of progress, and the lack of justice to victims of such crimes,” said Ikleela.

Ikleela said the President told VOC representatives that he follows the anti-rape rallies being held in Male’, and believes in the constitutional right to freedom of assembly.

“The President said he acknowledges our concerns and that he himself shares the concerns. And he said that he will work on this as a matter of high priority,” she said.

Ikleela said that the Gender Minister and VOC representatives discussed collaborative efforts between Gender Ministry, VOC and other stakeholders which can be held to address the issue.

“We also discussed providing psychosocial support to victims and what can be done by schools to raise awareness among students regarding this,” she said.

Ikleela said the VOC will hold meetings with Gender Ministry and Education Ministry, and begin work on devising a sexual violence awareness campaign for children soon.