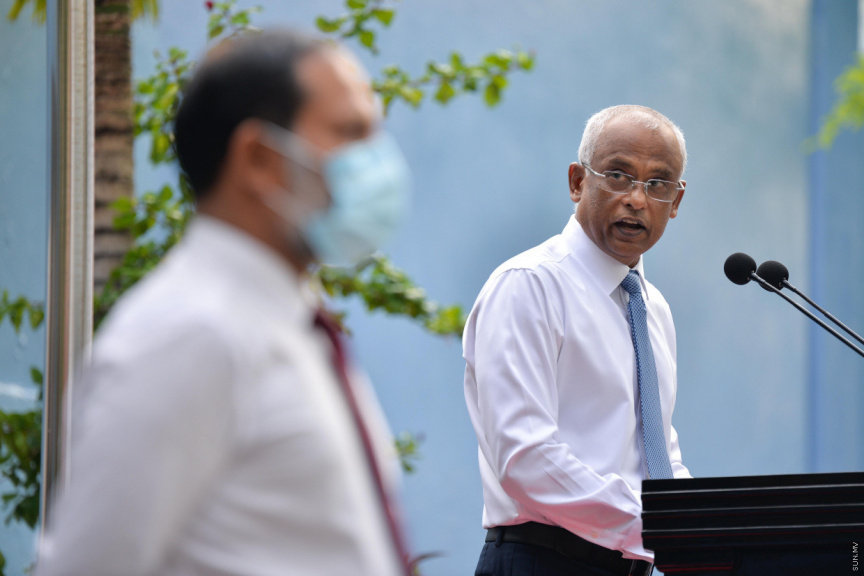 The appeal comes amid an increase in reports of crimes of sexual violence and domestic violence against women and children in the country.

In a visit to the Iskandhar Building to meet with officers of Maldives Police Service on Sunday evening, the President said the biggest demand of the Maldivian people is for the government to establish justice.

The President said that the path to justice begins with the police, and that the key to establishing justice lays with completing thorough and speedy investigations into crimes.

The President said the Maldives still has a hard time ahead in the road to recovery from the coronavirus pandemic.

He also noted that the coronavirus pandemic has had a huge impact on the economy, leading to loss of income and livelihood, and giving rise to multiple social issues.

The President noted that many of the social issues aren’t new, but long-standing issues which have continued to fester for years due to lack of focus on addressing the issues and taking necessary action.

“Whether it’s the issue of undocumented workers, the issue of sexual violence against children, domestic violence or drug trafficking; these are all long-standing problems within our community which have gone unresolved,” he said.

The President said that his government is committed to solving such long-standing social issues.

He said that the role of the police in solving long-standing social issues is pivotal, given that the institution plays the most important role in enforcing the law, and is the institution which works closest to the people.

The President said that his government’s efforts to solve the issues require legislative changes, along with additional resources and training to the police and other law enforcement institutions.

He also promised to reinforce matters pertaining to the welfare of the police.