Protesters gather in front of Gender Ministry to denounce rape, culture of impunity 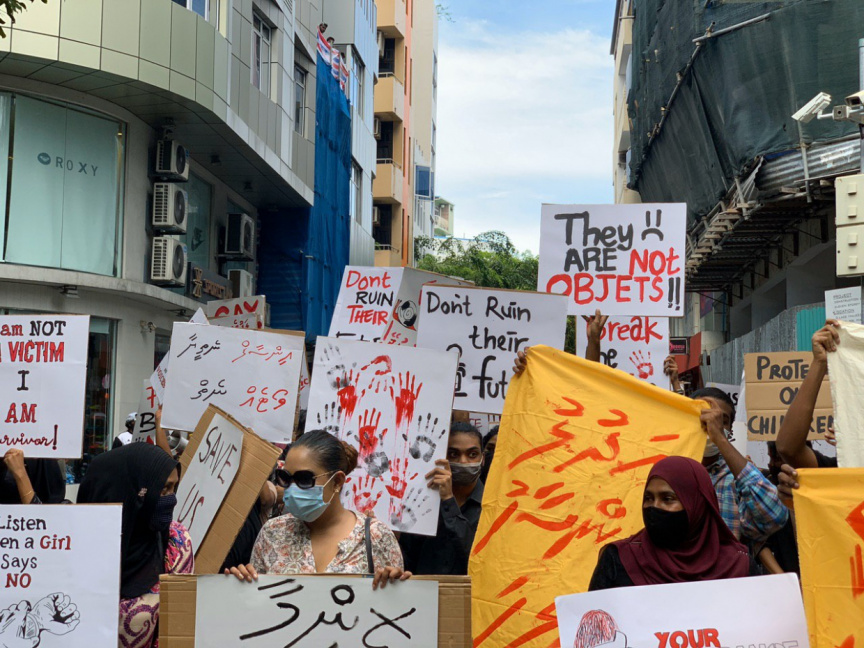 Anti-rape protest in front of Gender Ministry headquarters on June 29, 2020.

A crowd of protesters gathered in front of the Gender Ministry headquarters in the capital on Monday evening to stage a protest condemning rape and impunity.

The protest was organized by advocacy group, Voice of Children Maldives, to take a stand against rape and impunity.

The protest had only few participants when it began at 04:00 pm, but has since drawn a larger crowd.

It follows widespread outrage following the release of the suspects in a sexual assault which took place on board a safari boat off the cost of suburban Hulhumale’.

The crime was reported to the police at approximately 05:00 am on Friday.

The two suspects were arrested from the Hulhumale’ jetty, which the police said was treated as part of the scene of the crime, but were later released from police custody citing to “lack of sufficient grounds to keep them detained for the investigation”.

One of the suspects is reported to be the husband of a parliamentarian, giving rise to allegations the suspects were released using political influence.

According to Sun’s reporter at the scene, the protesters are wearing masks and maintaining physical distance from one another.

The protest has attracted a crowd of some 100 people, said the reporter.

The protesters include both men and women, and are holding posters and banners.

Public gatherings of more than three people remain banned amid the state of public health emergency which has been declared in the country in response to the coronavirus pandemic.

But while the police had intervened to quickly disperse a protest staged in front of the Parliament last week, the police have closed off the road and are allowing the anti-rape protest to proceed.

And the number of police officers operating in the area is fewer in number what was deployed to disperse the previous protest.

Amid the allegations of links between the suspects and government leaders, the opposition has called on authorities to release the identities of the suspects.

The police issued a statement on Sunday in which they provided assurance of a thorough and impartial investigation into the case.

This Monday’s protest in front of the Gender Ministry headquarters comes after a series of similar anti-rape protests in front of the government building in January, sparked by public outrage over the rape of a 20-month child in southern Maldives.

It had led to the resignation of then-Gender Minister Shidhatha Shareef.