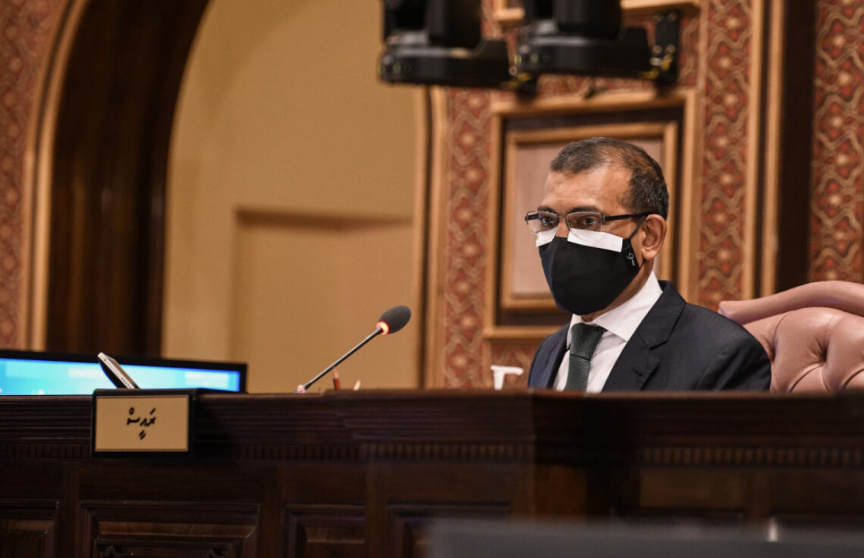 Parliament’s Speaker, former President Mohamed Nasheed, on Monday, appealed to the Maldivian people not to believe the allegation the men accused of sexually assaulting a woman on board a safari boat over the weekend were released from police custody due to the political influence of a parliamentarian.

The crime had taken place on board a safari boat off the coast of suburban Hulhumale’, and was reported to the police at approximately 05:00 am on Friday.

The two suspects were arrested from the scene of the crime, but were later released from police custody due to “lack of sufficient grounds to keep them detained for the investigation”.

It is being alleged they were released from custody because one of the suspects is the spouse of a parliamentarian.

With parliamentarians engaged in debate over an emergency motion presented by Nolhivaram MP Mohamed Nasheed Abdulla in response to the case, Speaker Nasheed said that members of political parties on both sides have alleged that suspects of the sexual assault case were released because one of the suspects was the husband of a parliamentarian.

But the police have stated they were released after conducting all necessary investigations they were able to at the time, he said.

“It’s my heartfelt appeal that no one believes he was released through the power and influence of a honorable member of this Parliament,” said Nasheed.

He said that it is unacceptable that a parliamentarian should call the head of an institution or to provide instructions or recommendations or even to clarify information in response to a police investigation, especially when it involves crimes such as sexual offenses, domestic violence and cases linked with rights of children.

“It is something the Parliament, and I myself for sure, will not accept,” said Nasheed.

The police, in a statement on Sunday, said the sexual assault was reported when the police approached a woman and two men – the victim and the two suspects - on the Hulhumale’ jetty on Friday.

According to the police, the victim said she went to the safari boat on Thursday night after receiving an invitation from a friend, where she met and spent time with the two suspects who groped her without her consent and sexually assaulted her. She said she jumped overboard to escape them, after which the two suspects followed her on a dinghy and pulled her out of the water and took her to the Hulhumale’ jetty.

The police said the two men were taken into custody immediately because the jetty area was treated by the police as part of the crime scene, but were released from custody because of lack of grounds to keep them detained for the investigation based on the information which had been collected to that point.

The move is a marked difference from the standard approach of the police in dealing with cases of sexual violence, where police petition the court for suspects to be remanded in police custody for the investigation.

Meanwhile, the police said in its statement that the victim said she did not talk any news outlet regarding the crime, after a local news outlet published an article on Sunday morning which describes the incident. According to the article, which the news outlet said was based on information provided by the victim herself, she was not just groped and sexually assaulted, but also raped.

Amid the allegations of links between the suspects and government leaders, the opposition has called on authorities to release the identities of the suspects.

The police have provided assurance of thorough and impartial investigation into the case.