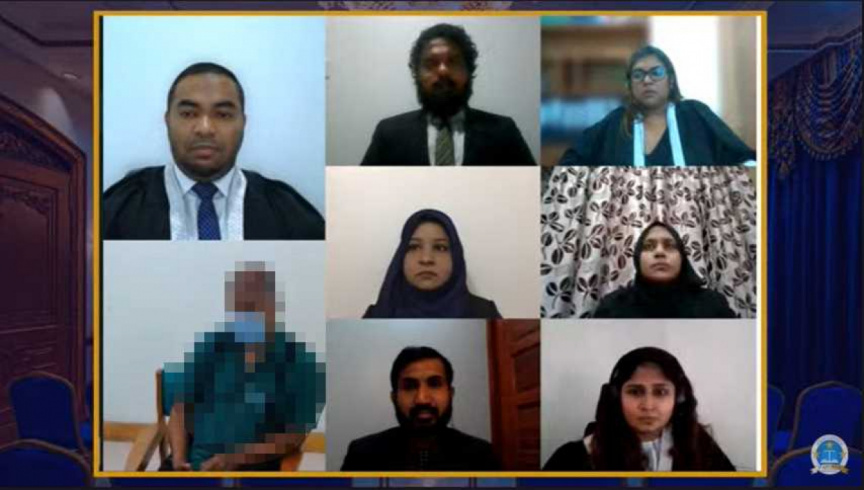 Photo shows a Supreme Court hearing underway via video conference. A first in the history of Maldives, the video conference trial saw a father's conviction for sexually abusing his own daughter upheld on June 1, 2020.

The first Supreme Court case to be held via video conference in the Maldives has been decided against the accused.

A first in the history of Maldives, the video conference hearing saw the conviction of a father accused of sexually abusing his own daughter upheld.

The Supreme Court case was reviewed in a hearing held at 13:00 today. The accused in the case was found guilty of molesting his daughter, who is a minor. The Criminal Court had ruled to find the accused, Adnaan Hussain from Gulbahaaruge, B. Thulhaadhoo guilty of the charges.

The lower court had handed down a punishment of 36 lashes as a Ta’zir punishment and a prison sentence of six years.

In Islamic law, a Ta’zir punishment is administered at the discretion of a judge and involves criminal offenses for which a Hadd is not specified in the Quran.

The ruling was upheld by the High Court when the accused appealed and was once again appealed to the Supreme Court which has now decided on the case.

The Criminal Court had ruled that the child in the case was on the receiving end of such abuse from a young age. Adnaan was accused of raping, showing pornographic material, inappropriate close contact, and even bathing the child while her mother was not present.

The child had retold explicit details of the abuse to the investigation and trial of the lower court. Witness statements were provided to the trial by another girl, the abused child’s mother and grandmother as well. The lower court found that the witness statements corresponded with each other. The court also cited the medico-legal report of the child which stated she had been sexually abused.

The first live broadcast hearing of SC scheduled for tomorrow

The first video conference hearing of the Supreme Court to be broadcast live will be held tomorrow.

Supreme Court hearings are being held live and via video conference due to the situation with COVID-19 in the Maldives. Hearings will be broadcast live via Youtube and Twitter.

The live broadcast hearing is the case appealed by Ismail Masood from M. Thulhaagiri, Male’ against the Housing Development and Finance Corporation. It will be held at 11:00 tomorrow.

Minister: Nothing can be done to assist farmers