Agriculture Minister: Nothing can be done to assist suffering farmers 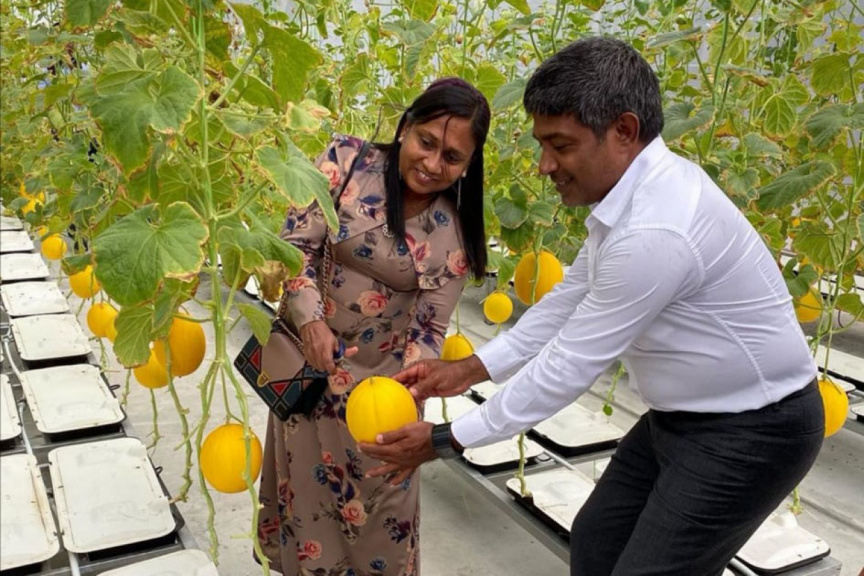 Ministry of Fisheries, Marine Resources, and Agriculture Zaha Waheed during a ceremony to commence farming and agriculture works in an island.

Fisheries and Agriculture Minister Zaha Waheed has said in a Parliamentary Committee that there is nothing that can be done to remedy the situation of agriculture workers who are facing damage to crops due to the weather.

The Minister was speaking in the Parliament’s Committee on Climate Change today when she made the remark. The Minister said that there were no mechanisms to compensate agriculture workers due to the impact of bad weather, which is why the Ministry could not do anything to remedy the situation.

She did express concern in the meeting over the damage caused to crops but stated that it was not a new event to experience such damage during the rainy season. Due to storm surges and heavy rains, the Minister said that crops always suffer damage. This was not something that can be fixed, said the Minister.

“Collectively, I have to say a lot of damages are inflicted. This is not something we can resolve. Every year in the same season. A lot of damage was faced due to the powerful winds faced this time.” Said the Minister.

Councils inform collected data on the damage every year to the Ministry. The Minister stated that although councils worked disproportionately to collect information, farmers would be provided the hope that a compensation of some sort would be delivered.

The Minister said that no assistance of any sort has so far been provided to farmers due to a lack of arrangements.

Any type of intervention can be done when a funded project is underway, said the Minister.  The current focus was on compensating farmers for their work, by encouraging individuals to get into the field with extra opportunities through agriculture projects.

She also called for the formation of a compensation mechanism by collaboration.

Sharing details of the challenges posed to agriculture, the Minister said that no council was able to clearly outline the number of agricultural workers, land allocated for the purpose, and the type of products being farmed on the plots.

“We have not enquired the damages to plots on every island by our own initiative. Because there is no way of assisting right now.” Said the Minister.

The Ministry was working to arrange monitoring systems for plots of land in islands that are to be registered, in collaboration with councils.

“For disasters, assistance is provided, under the current mechanism. We don’t collect the information proactively. Because there is nothing we can do for them currently.” Said the Minister.

The Committee said that 75 islands have reported damage due to the intense weather experienced.