MVR 1.4 million in damages to Male’ amid severe weather conditions 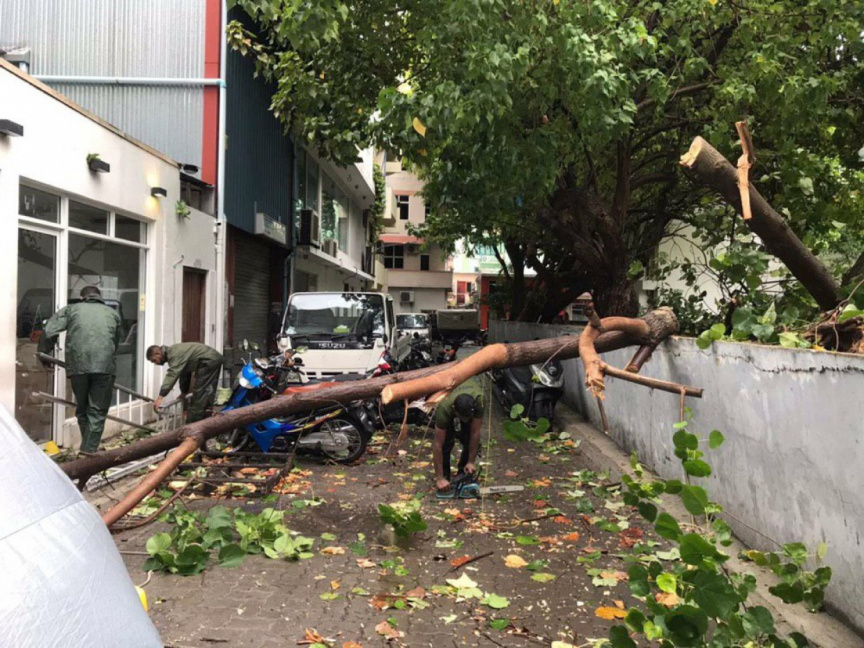 MNDF officers clear a road of a tree fallen amid severe weather in Male' City.

Male’ City Mayor Shifa Mohamed, on Friday, announced the severe weather affecting the country has resulted in an estimated MVR 1.4 million in damages in the capital.

Severe weather conditions are being experienced across the country, with several islands, mostly located in southern Maldives, reporting damages.

The storm caused extensive damages to the Rasfannu beach, a landmark located in the western end of the capital. Swell waves eroded the beach, leaving it visibly fractured and littered with toppled over umbrellas and debris.

Mayor Shifa Mohamed highlighted the damages in an appearance at a National Emergency Operations Center press briefing on Friday.

“The rain due to the change in weather resulted in MVR 1.4 million in damages to Male’ alone,” she said.

She said the Male’ City Council was working on repairing the damages.

The severe weather has also resulted in an increase in maritime accidents, and the Maldives Meteorological Service has urged caution.

The severe weather comes as the country battles to curb an outbreak of the new coronavirus.

The populous capital has since become the epicenter of the coronavirus outbreak in the country, contributing to over 1,500 of the country’s 1,591 cases.