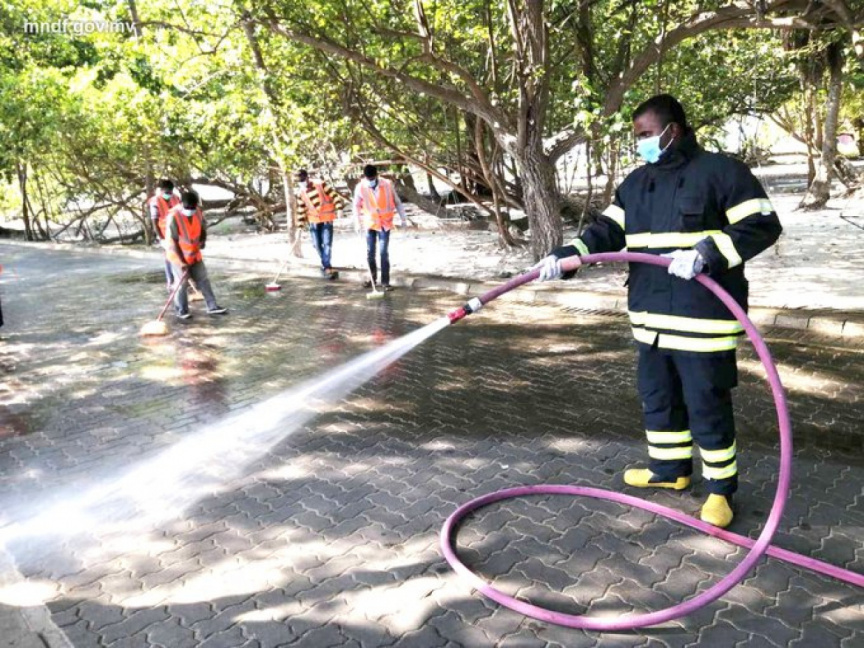 The streets of Vilimale are disinfected using chlorine as a preventive measure against COVID-19 on March 26, 2020. (Photo/MNDF)

Maldivian authorities, on Thursday, began disinfecting the streets of suburban Vilimale’ as a precautionary measure against COVID-19.

The project in Vilimale’, which began this morning, is a collaboration between the City Council and the Maldives National Defense Force (MNDF) Fire and Rescue Service. It follows similar projects in Male’ City and suburban Hulhumale’.

The streets are being cleaned using chlorine –based water. And the city council has provided assurance the work is being conducted under the strict guidance of Health Protection Agency (HPA), and the Environment Ministry.

It will have minimal impact on the environment, said the city council.

Councils in the atolls have also initiated similar projects to disinfect the streets.

The Addu City Council is scheduled to disinfect the streets of the city on Friday.

Maldives has now decided to suspend issuance of on-arrival visa, starting from March 27, in an effort to lower the risk of further virus cases.

Maldivian health authorities have warned the success in containing the virus so far did not make the risk the virus posed to the general population any less.

Villimale’ to remain vehicle-free, despite bridge