Male’-Thilafushi bridge to be built with financial assistance from India 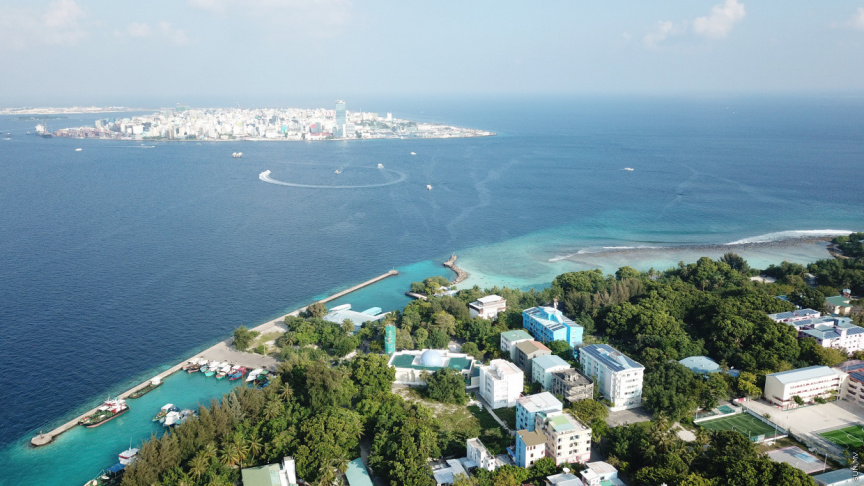 Male' City is visible in the distance in this aerial shot of Vilimale'. (File Photo/Sun/Fayaz Moosa)

Planning Ministry, on Thursday, announced that the planned bridge between Male’ City and Thilafushi will be built with financial assistance from India.

The announcement was made by Minister of State for Planning, Akram Kamaluddin, at the contract signing for the ground investigation for the project this Thursday afternoon.

“This bridge will be built with the assistance of the Indian government,” he said.

He said the exact value of the financial assistant which India will grant had yet to be finalized.

“Negotiations are ongoing. The exact value hasn’t been finalized yet. The two governments are engaged in related negotiations,” said Akram.

The Male’ to Thilafushi Link Project is part of the Greater Male’ Connectivity Bridge Project, aimed at building bridges to connect Male’ with Thilafushi, and also Vilimale’ and Gulhifalhu.

According to the proposal presented by the Maldivian government at the Partnership Forum in 2019, the Greater Male’ Connectivity Bridge Project is estimated to cost USD 488 million (MVR 7.6 billion).

Akram said the tendering process for the Male to Thilafushi Link Project will be conducted in India.

Akram said that the Indian government would conduct the full tendering process, including shortlisting companies.

He said that work was in progress to find a company to contract the bridge project to, and that the tendering process would be held in July.

MVR 411 million has been allocated on the State budget 2020 for the Male’-Thilafushi bridge.

The Maldivian government has previously stated that it expected the Greater Male’ Connectivity Bridge Project to facilitate both transport and trade within the Greater Male’ region, and allow the warehoused located in Male’ to be moved to the industrial zone.