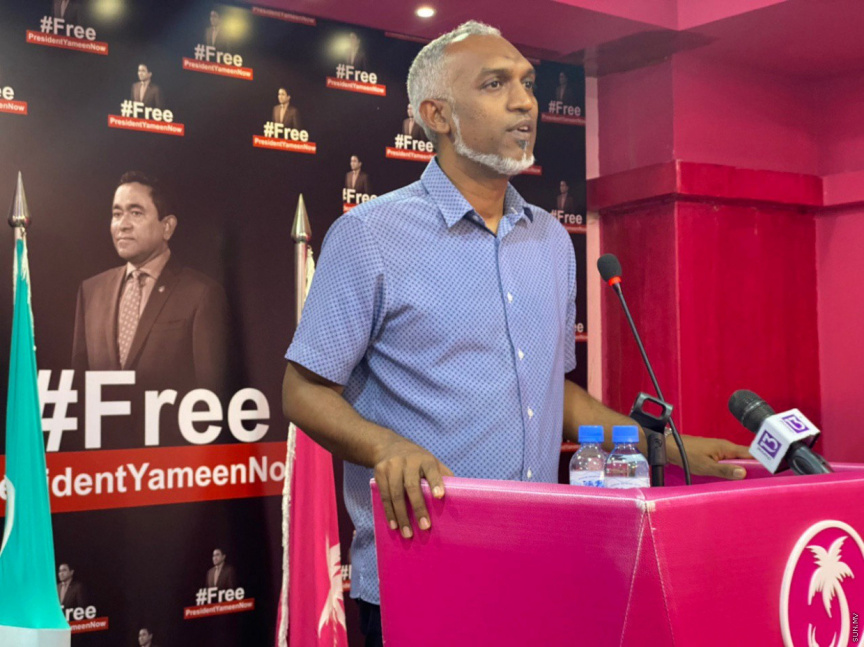 Dr. Mohamed Muizzu has described the former President Mohamed Nasheed’s statements saying that Dr. Muizzu was from H.A Vashafaru as a means of belittling Dr. Muizzu and a way of obscuring the truth. Dr. Muizzu, who is contesting in the upcoming local council elections for the post of Male’ city mayor, responded by saying that there was no advantage from being native to a specific island.

The former President had said at a rally that Dr. Muizzu was a person from H.A. Vashafaru before going on to criticize him. Nasheed even said that Dr. Muizzu was the architect behind Male’ city’s destruction and that no one would vote for Dr. Muizzu. The leader of MDP, Mohamed Nasheed, even went as far as to call Dr. Muizzu “Holhi Muizzu” or “Pipe Muizzu” a reference to the plastic pipes laid in the streets of Male’ city during the tenure of Dr. Muizzu as the housing minister.

Speaking at a rally of PPM last night, Dr. Muizzu described the attack as a tactic of anti-campaigning and a way of distracting from the truth. He said that anti- campaigning was not a tactic acceptable in a democracy, and it was not acceptable that the “champions of democracy” were speaking in that manner.

“Yes, it is true, my father is a proud citizen of H.A Vashafaru. I am proud of that…Maybe it is the personality of the people who uttered the words or maybe they didn’t know that truth can be said instead of lie, or maybe obscuring the truth is a political tactic of theirs.” said Dr. Muizzu.

“My mother is from Male’, a citizen of Male’ city, a native of Male’ city. Maybe they didn’t know it, but my mother’s family is from Male’. Starting from my great grandfather, the family ancestry beyond is also from Male’”, said Dr. Muizzu who added that he would not be reiterating this statement.

Muizzu also said that most houses in the Maafannu ward and North Maafannu constituency were connected with his mother’s family.

“However, my family lineage is not important to me. No matter where they are from, they are only different in their connection with Allah (SWT),” said Dr. Muizzu.

“If a road is being built on an island, it should not be developed in a quality manner. They (government ministers) get worried. Expensive tar roads are only to be built in Male’. If a road is built on an island, it is developed by constructing a layer of cement on the sand.” said Dr. Muizzu who pointed out that differentiating was not accepted by anyone as a characteristic of people who loved the country and saw everyone as equals. The upcoming elections were a good opportunity to put a stop to this, according to Dr. Muizzu.

Despite the former minister’s statements, President Ibrahim Mohamed Solih has rep[eatedly stated that his government would not differentiate between citizens before and after taking office.