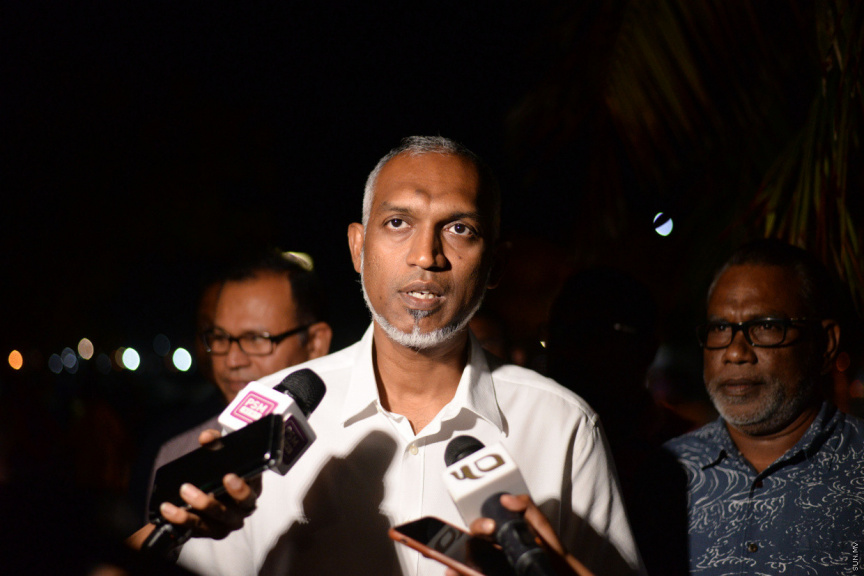 Dr. Mohamed Muizzu is pictured speaking with reporters on February 22, 2020. The former Housing Minister was summoned for questioning by police regarding the Noomadi arbitration case. (Sun Photo/Ahmed Saeed)

Former Housing Minister and Male’ city mayoral candidate in the upcoming local council elections, Dr. Mohamed Muizzu was summoned to the police last night for questioning that lasted for almost an hour.

Dr. Muizzu was questioned due to a complaint by the Attorney General's Office over the former minister's actions in the arbitration case brought against the state by Noomadi Resorts and Residences.

Speaking to reporters outside the police headquarters, Dr. Muizzu stated that a lot of allegations were made against him during the questioning session by police which took almost an hour.

Sources claim that Dr. Muizzu is accused of obstruction of justice and impeding the work of the state.

Dr. Muizzu also said that he believed there was a connection between his bid for Male’ city mayor and police summoning him for questioning.

“It is not a good quality of democracy to prevent the equal competition (of candidates) and segregate candidates (at a time) when faced with an election. It is a sign of autocracy,” said Dr. Muizzu at a rally last night.

The former minister also stated that he was still determined to continue with his bid for mayor, despite being summoned for questioning by Police. Dr. Muizzu is contesting in the elections of behalf of the opposition PPM.