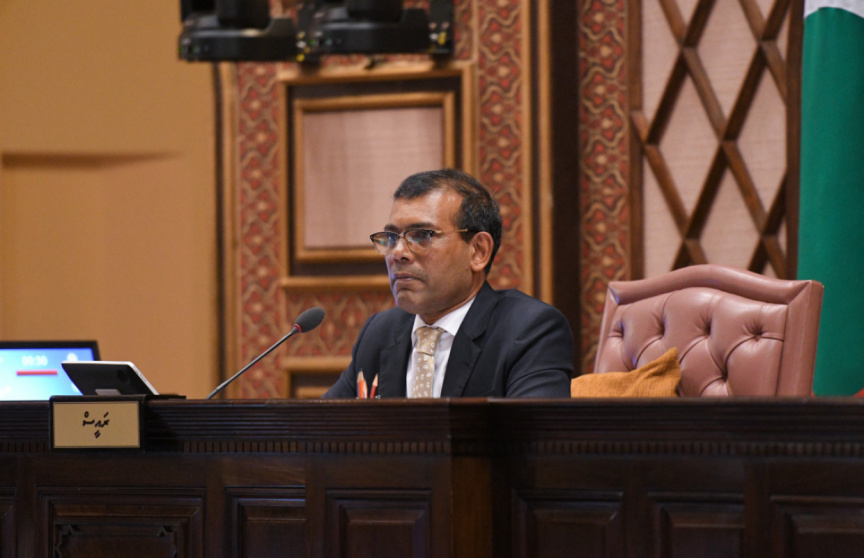 Speaker of Parliament, former President Mohamed Nasheed, on Wednesday, said that the young mentally handicapped man, believed to be a victim of sexual abuse, remained under the care of former honorary disability ambassador Ahmed Hishan, his alleged abuser, despite the 2018 Family Court ruling denying Hishan legal guardianship over the man.

South Galolhu MP Mickail Naseem has filed an emergency motion for action against Gender Ministry over the revelation it awarded Hishan an honorary disability ambassador position despite being informed by the police that he was a suspected sex offender.

Many parliamentarians, during the ongoing debate over the motion, questioned the current whereabouts of the young man, believed to be one of Hishan’s victims.

Speaker Nasheed, after clarifying the current whereabouts of the young man, announced that he continued to live under Hishan’s care.

“I am sad to say this child… And I say that he is a child because he is considered as such in the eyes of the law because of his disability… That child remains with Ahmed Hishan,” said Nasheed.

Family Court had denied the 2018 legal guardianship petition filed by Hishan citing an assessment report on Hishan prepared by the State, which included police intelligence reports of the allegations of sexual abuse against him.

The judges pressed the Gender Ministry legal officer who attended the hearing as to why the institution allowed a mentally handicapped person to remain with Hishan, despite being privy to information pointing to him being a sex offender.

The legal officer failed to answer many of the questions which the judges asked, and when pressed, said that the Gender Ministry hadn’t attempted to clarify his whereabouts because he had been above 18 years of age at the time.

Judge Mohamed Niyaz, who presided over the hearing along with two other judges, said that assessments proved the young man to be mentally handicapped, and that mentally handicapped persons, in the eyes of law, would not be considered an adult, but a child.

He said that the State therefore had a responsibility to clarify his whereabouts and ensure his safety.

Hishan is currently under investigation by the police over the sexual abuse allegations against him, and is currently barred from leaving the country.