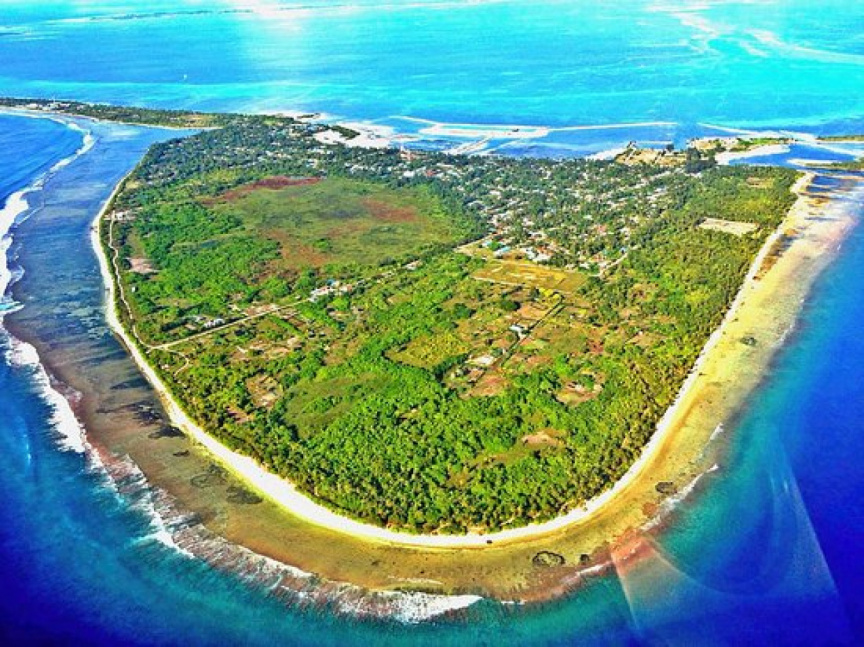 An aerial shot of Hulhumeedhoo in Addu city. (Photo/Tripadvisor)

The calls from Meedhoo and Hulhudhoo to leave Addu city and return to the status of a separate island once again are amplifying day by day. Some islanders have gone as far as to submit a petition to the President’s Office and Parliament to leave Addu city and elect their own councils in the upcoming local council elections.

So, what are the thoughts of the residents of Hulhudhoo and Meedhoo on this? How much does the petition represent and reflect the wishes of the people?

“The residents of Meedhoo do not wish to leave Addu city. The petition is something submitted by the people of Hulhudhoo,” said Hussain Hiyaaz, who is a councilor of Meedhoo.

Hiyaaz alleged that Hulhudhoo councilor Ibrahim Shukury was behind the move and claimed that the people of Hulhudhoo also did not wish to leave Addu city.

“This (petition) isn’t something created by the people who are living in the island. This is something by a few people living in Male’ city. I am not aware of any moves to create and sign a petition to leave Addu city by the people of Hulhudhoo in the past.” was the response of Shukury.

He then went on to note the difficulties faced by the residents of Meedhoo and Hulhudhoo, collectively known as Hulhumeedhoo since the two islands remain geographically separate and away from the other islands of Addu City which are all connected. Shukury noted the difficulties posed for patients and sick people who are forced to cross a sea just to get the necessary medical care from the hospital in Hithadhoo, which is on the other side of the atoll.

People from Meedhoo and Hulhudhoo had to travel to Hithadhoo to pay motorcycle fees until recently. A Mira office was established in Hulhumeedhoo in December.

A fall from grace to elect an island council

“Are we supposed to go and get services from Hithadhoo forever? This is a concern. Why not make arrangements for a doctor from Hithadhoo to come and consult patients here? That will be more convenient. It is also good if we can get other services from the island without having to travel.” said Shukury.

Shukury also highlighted that leaving Addu city was not going to solve the problems faced by Hulhumeedhoo and stated that the amended decentralized laws would allow the development that the residents of Hulhudhoo-Meedhoo wished. He also noted that it would be “fall” to elect an island council after being part of a city.

“There is pride in being designated as a city. So, why should we take a step back? Falling back to an island council after being part of a city is not something I believe. But I will accept and support whatever the people want.” said Shukury.

So, what are the thoughts of the people? A divided picture is formed on social media. Some claim that it would be a mistake to leave Addu city, while others criticized the lack of development gained from being a part of a city and claimed that the best way was for Hulhumeedhoo to get to its feet and become independent.

“What is the use of being part of a city just for the sake of a name? Everything related to the island is decided by the council, the island of Hulhumeedhoo is not represented at all in the council.” were the words of a social media user.

The petition is strong and gaining momentum!

A lot of reasons for Hulhumeedhoo to leave Addu city have been included in the petition.

The petition notes that the people of Hulhudhoo-Meedhoo are not provided with the administrative services or granted the financial and economic benefits of being part of a city.

One of the biggest reasons was the fact that people from Hulhudhoo-Meedhoo had to travel by sea to Feydhoo and travel once again by land to Hithadhoo to get most of the services.

Since the city council has only two councilors from Hulhudhoo-Meedhoo, it is a very rare occasion when a vote is decided with regards to the development and interest of Hulhudhoo-Meedhoo. The petition states that the only way to develop the islands under the true spirit of decentralization and provide the power and choice to the people was by leaving the city.

These ideas are backed by a lot of people from the city and the petition has gained 1000 signatures so far.

“The petition does have some good ideas, it is certainly better than how things have been. However, every island is granted its own budget now, so the issues faced right now can be resolved without leaving Addu city.” said another social media user.

Despite the divisions, Addu-Meedhoo MP Rozaina Adam is resolute in her support of remaining with Addu city. She has stated that she is not in support of the petition.

MP Rozaina tweeted last night that freedom and the chance for the district office to provide municipal services along with the granted budget was something she supported. MP Rozaina stated that this can be done without leaving the city.

“What I am saying is, what I am trying to say is that it would be smarter if residents did not see themselves as a person of the island but of Addu city and of the Maldives, instead of these district boards,” said Nasheed.

The outcome of the petition is hard to predict with the difference of opinion among the public. As the local council election nears, the petition clearly states that the people would only vote to elect an island council. So what will the end result be?

Fisherman sustains fish hook injury to the eye in Addu