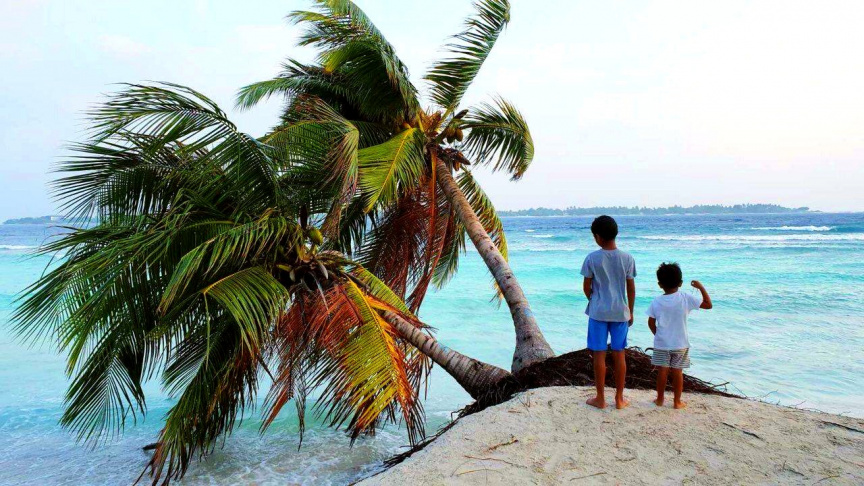 Photo shows children standing at the edge of beach in an island affected by erosion in the Maldives. (Photo/Twitter/Wadde)

Abdul Hannaan Yoosuf from Kudarikilu B. Atoll remembers the days when he and his companions would travel to the island of Bathala in B. Atoll to collect firewood. It was a large pristine island back then, full of tall trees and lush vegetation and well known for its abundance of coconuts.

Fast-forward to twenty, thirty years, not a single coconut palm can be seen on the once beautiful island. Hannaan says that the island is now nothing more than a sandbank.

Bathala is not alone in this danger. Mohamed Shareef from B. Kihaadhoo still clearly remembers the days when the nearby island of Veyofushi was full of different trees. The island was extremely ideal for agriculture back then. But now, a whole new picture if formed from the island, if you can call it an island even. It has now faded from the charts and become a small sandbank.

The islands of Maldives are known to get eroded and recover naturally. During the Northeast Monsoon, islands are eroded from the east, while in the Southwest Monsoon, islands face erosion from the west. But the fact that Bathala and Veyofushi disappeared within just two years, only means that the amount of sand recuperated and deposited naturally are not even close to the amount washed away. An eye-widening fact.

The situation is so bad that centuries-old trees at the edge of the beaches have slowly ended up at the mercy of the sea. A scary and disheartening picture for the people of these beautiful islands.

Infrastructure blocking the flow of sand!

“There are two reasons for erosion. The effects of human activity and climate change,” said Dr. Ibrahim Mohamed, the Deputy Director of Environment Protection Agency (EPA).

He stated that the islands of Maldives were formed so that sand is formed in the lagoons of the islands. The sand then flows through the lagoon with the current and gets deposited to another side of the island. Even though some of the sand is lost to the sea, this is recovered from the sand created by the reefs.

“What happens is that we humans, we bring changes to the dynamic or natural system of islands. For instance, the construction of harbors and other structures in the lagoon causes blockages in the flow of sand (within the laggon),” said Dr. Ibrahim.

Most of the time, harbor construction projects are conducted without not so much as a glace on the impact it can have on the environment. The end result is that sand washed away during the Northeast Monsoon not being deposited back to the original area during the Southwest Monsoon.

The sand from the same area is once again washed away during the Northeast Monsoon when the process is repeated. It either gets deposited inside the harbor or is lost to the sea forever in some islands.

The result of the destruction of reefs!

The white sands on the beaches come from the reefs that surround the islands. Formed from the waste of fish who consume the corals, and parts of the coral that disintegrate.

Dr. Ibrahim stated that one of the main reasons for erosion is caused due to the destruction of reefs due to climate change. The destruction causes a stop in the formation of sand.

He stated that global warming that causes the death of coral reefs could also be a factor in erosion. With the loss of these reefs that act as a shield, the beaches and islands are left at the mercy of the massive waves of the sea. This was the also what Ahmed Aleem who is an expert in the Water Solutions company that conducts Environmental Impact Assessments had to say.

“To make way for barges involved in construction works, rocks are sometimes removed from the reef crest. You can easily notice that erosion affects these areas more,” said Aleem.

Bathala and Veyofushi are not completely formed yet. The sand deposited to these islands are not powerful enough to withstand the pull of the waves back into the coean due to a lack of trees. Aleem stated that sand mining and removal from these islands could lead to a faster rate of erosion.

“These islands are still under formation naturally. The islands can be easily lost to erosion if sand is mined from these islands before they fully mature,” said Aleem.

Some have pointed towards sand mining as the cause of the loss of Bathala and Veyofushi. Many allege that it is the island of Landaagiraavaru resort near Bathala that is behind the loss of the island.

Dreamland resort is the closest resort to Veyofushi and has also been accused of misconduct just like Landaagiraavaru.

What is happening is extraordinary!

Islands in Maldives are always faced with erosion issues, but what is happening now, is on another scale. This is evident when 200-year old trees near the beach start to fall into the sea, as is the case with R. Fainu. The situation states that Fainu is being affected by erosion that has not been seen in the last 200 years.

“2017 and 2018 went well. Problems of erosion did not occur. However, the problem started to recur since mid-2019 and has now turned huge. Erosion has caused 200-year old trees to fall.” said Ibrahim Nasir, Council president of Fainu.

Another island affected by erosion to a similar level of alarm is B. Dharavandhoo. Once renowned for its beauty, the northern beach of the island is now almost non-existential. What remains instead of the beautiful white sand are large coarse rocks.

“We are closely monitoring and surveying the current events, we are also assessing possible options or steps that can be taken.” said the State Minister of Environment Ministry Dr. Abdulla Naseer.

Dr. Naseer, Dr. Ibrahim, and Aleem all agree that the current erosion levels are on another level and surveys need to be conducted to find a solution to this.

“It is imperative that long term surveys on every island need to be conducted to resolve this. It is not an easy task to go and find a solution all of a sudden. No matter how much we visit and advise on things to do, I don’t think that it will happen. Research needs to be done on some level to solve this.” said Dr. Naseer.

The world is changing, whether you like it or not!

It is a fact that the world is warming up because of the huge amount of greenhouse gases released by humans into the atmosphere. This affects the ocean tides and currents as well.

A survey published by the Nature Communication Magazine’s Climate Central read that the estimated number of people affected by rising sea levels would increase by threefold in the year 2050. Around 150 million people are currently living in areas that are projected to be underwater by the year 2050!

From the results of the survey, a sizeable area of the Maldivian capital Male’ would be underwater by the year 2050. This is also the case with most islands of the country. Indeed, a scary prospect!

The issue of erosion has now turned into a whole new level of danger. What had been a common occurrence, is now threatening to make islands dissapear as the people look on in despair!

The world needs to unite for this and speak in the same voice. But the question is, will that happen before islands start to disappear underwater? Will it be too late when we wake up and open our eyes to reality?