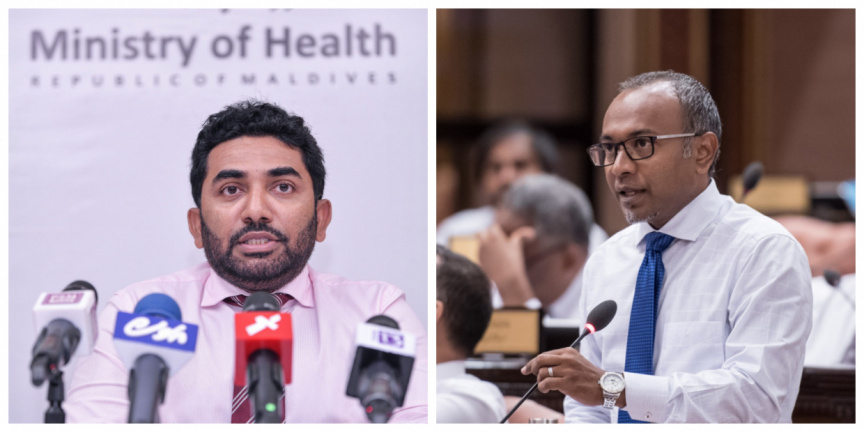 MP Hassan Latheef (R), Health Minister Abdulla Ameen (L). January 25, 2020: MP Hassan called for the resignation of the Minister over a request by HPA regarding female circumcision to the Islamic Ministry.

West Henveiru MP and MDP Chairperson Hassan Latheef has called on the Health Minister Abdulla Ameen to resign if he cannot fulfill the responsibilities of the post according to the policies of the government.

MP Hassan’s made the call in a tweet regarding a request by the Health Protection Agency (HPA) made to the Islamic Ministry over the religious standpoint of female circumcision.

The Islamic Ministry had passed the request to the Fatwa Council which was later canceled by the Minister in a memo to the HPA. The Minister noted in the memo that female circumcision was not a policy nor encouraged by the government.

Minister Ameen was targeted by MP Hassan Latheef who stated that there were a lot of people who knew how to implement government policies and called on the Minister to resign if he did not know how to do so.

Female circumcision has been described as sexual abuse by the former President and current Speaker of the Parliament Mohamed Nasheed. The practice was deemed as having no religious basis by former President religious scholar Maumoon Abdul Gayoom as well.

HPA has so far not commented on why it made the request for the religious standpoint on female circumcision.

Female circumcision was widely practiced in the Maldives previously and was eradicated in the 1970s. Research has shown that it can have a negative and life-threatening effect on children. Efforts by the WHO against the practice has seen it eradicated from several countries. However, there are still some countries where the practice is conducted.

Arrangements to return locals in Wuhan yet to be made

''No suspected cases of Coronavirus so far in Maldives'

More thermal cameras to be installed for Coronavirus