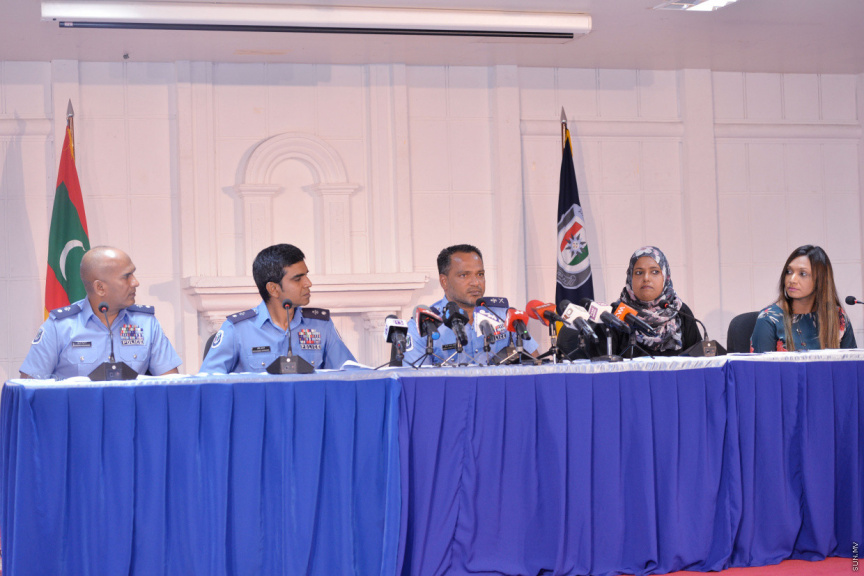 Joint press conference by Maldives Police Service and Gender Ministry on January 18, 2020, in response to the rape of a 20-month toddler in Southern Maldives. (Sun Photo/Fayaz Moosa)

The office, following this audit, concluded that the approaches used by State institutions in dealing with child abuse cases were ineffective. The report underscores alarming systematic failures.

WHAT IS THE RESPONSIBILITY OF GENDER MINISTRY?

Gender Minister, by law, is the leading State institution in protecting the rights of children. It is mandated to establish the national child protection system, and to delegate the work to department within itself and other State institutions in order to enforce the system.

Mechanisms are already in place to report child abuse cases. Cases of child abuse which are reported are entered into the referral database. The circumstances surrounding each case is analyzed, and cases are prioritized based on this risk analysis, after which cases are assigned to case workers.

Gender Ministry’s Standard Operating Protocol (SOP) establishes that assessments for each referral must be completed within seven days.

However, the audit revealed an undue amount of time taken to process referrals. The office took 54 cases as samples, and found it had taken an average of 45 days to prepare referral forms for 26 out of these 54 cases.

It also revealed that it sometimes took 60 days before some of the cases were allocated.

The office pointed out that this undue amount of time to conduct administrative tasks results in delays in implementation of other work, heightening the risk of failure to provide protection to victims when required, and the risk of more tragedies.

It found that it sometimes took three days for investigative officers to be assigned to cases, and pointed out that every day which lapses without initiation of an investigation heightened the risk of loss of crucial evidence.

FAILURE TO INCLUDE RISK CATEGORY IN CASE FILES

Gender Ministry’s procedure manual establishes categories which must be used to priories cases based on risk. It ranges from “low risk” cases to “high risk” cases to “very high risk cases”.

Gender Ministry is required to mention the priority level on case files.

However, the audit revealed that none of the 54 cases taken as samples mentioned the level of priority.

This lack of emphasis of the priority level, again, heightens the opportunity of delays in investigations into high risk cases which need immediate action, and the risk of tragedies.

LACK OF MANAGEMENT OF RECORDS OF CASES FILED WITH POLICE

The Maldives Police Service is required to immediately share child abuse cases filed with them with the Gender Ministry.

The office, when it attempted to audit the efficiency of inter-agency efforts, found that the dates on which the police shared case information with Gender Ministry wasn’t available. The dates weren’t available on any of the 39 cases taken as samples, underscoring the lack of efficiency in management of records.

FAILURE TO CONDUCT ASSESSMENTS WITHIN THE REQUIRED PERIOD OF TIME

Gender Ministry is required to conduct initial assessments in response to each referral within seven days, and to conduct core assessments and action plans for high risk cases within 24 hours.

It took an average of 97 days to conduct assessments.

The police are required to provide their immediate physical intervention and investigation in response to certain types of child abuse cases filed with them.

The office pointed out that prolonged investigations prolonged punishment to those who required punishment, and heightened risk of loss of public confidence in State institutions.

It also noted the failure in adherence to the policy that investigative officers must not be assigned more than 20 cases at any given time – and linked it with a shortage in trained staff and staff being required to take over other duties.

It noted that overworking investigative officers heightened the risk of prolonged investigations, and as a consequence, loss of information as to the current whereabouts of key suspects and witnesses, deterring the ability to collect the information required for investigations.

DELAYS IN MEDICAL ATTENTION TO VICTIMS

State institutions are required to take victims of sexual and physical abuse to health facilities for medical assessments within 72 hours the victims suffered the abuse.

The police, when questioned by auditors, cited the lack of pediatricians or gynecologists available in some of the islands to conduct the medical assessments, requiring for transport to other islands, as the main reason for such delays.

Delays in medical assessments will lead to loss of key forensic evidence, and reduced chances of corroborating the injuries sustained by the victim, and listed by them in their statements, with medical proof.

Medical documents and the expert testimony of medical professionals are key evidence required to secure a successful conviction, and the delay in conduction of medical assessments and the resultant loss in evidence, reduces the chances of justice to victims, noted the office.

The office has recommended State institutions to rectify such systematic lapses, to conduct speedier investigations, to ensure proper management of records, and improve inter-agency cooperation and information sharing in order to identify and arrest child abusers and protect victims of child abuse.

The office has expressed deep concern over the rape of a 20-month toddler in Southern Maldives which recently took place amidst all these systematic lapses.