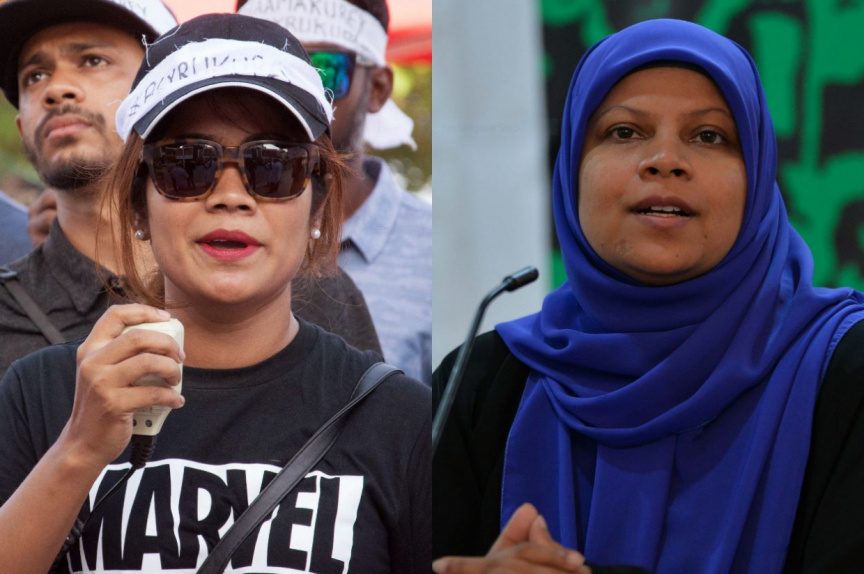 Maldives Bar Council ExCo member and lawyer Anara Naeem’s criticism of another lawyer has turned into a very public Twitter spat between the two.

The argument was sparked when Anara criticized a senior lawyer of the Public Interest Law Center, Mariyam Shunana, who represent the family of a small child killed when a sack of cement fell on her as she was walking past a construction site in Male’ city last year.

The girl, Raushan Jian was walking on a road in Male’ city with her mother when the incident happened. It was from a construction site operated by W Construction Company, a company owned by Anara’s husband Adam Shafeeq, from which the sack fell from. Jian’s family has now submitted the case to the Civil Court to obtain damages after the criminal trial ended.

A tweet sent out by Shunana regarding New Year’s resolutions was replied by Anara, who said that Shunana should also consider including how her conduct could result in the loss of jobs and eventually impoverish a family.

Shunana responded to this tweet by saying that the situation of the family who suffered a lifelong loss due to the lack of instructions by the senior officials of a company should also be taken into consideration. Anara once again responded by saying that the responsibility for negligence should be undertaken by the employee and not the employer, somethign she has previously stated.

Shunana disagreed with this conclusion and maintained that the responsibility lay with the employers.

How did the case unfold?

Four foreigners, a supervisor named Moosa Hassan working on the construction site when Jian was killed as well as Adam Shafeeq was charged by the state in the case. Shafeeq was found not guilty by the court in the trial, however, Moosa was found guilty and fined MVR 115,200.

The remaining two workers were found guilty for failing to warn of imminent danger and fined by MVR 7200.

Anara’s tweets have seen her become the subject of intense criticism by some members of the public and the legal field, who questioned her impartiality and ethics as a member of the Bar Council for attacking an attorney working on a case where her interests lay. Those criticizing her were quick to note that the civil proceedings in the case of Jian were still in court.

Former Prosecutor General Muhuthaaz Muhusin described Anara’s conduct in the matter as unacceptable. Anara responded to the former PG by saying that she believed in providing advice to those requiring it.

The recently formed Bar Council has the mandate to regulate lawyers in the legal field. Its responsibilities include issuing licenses, suspensions and taking action against possible violations.