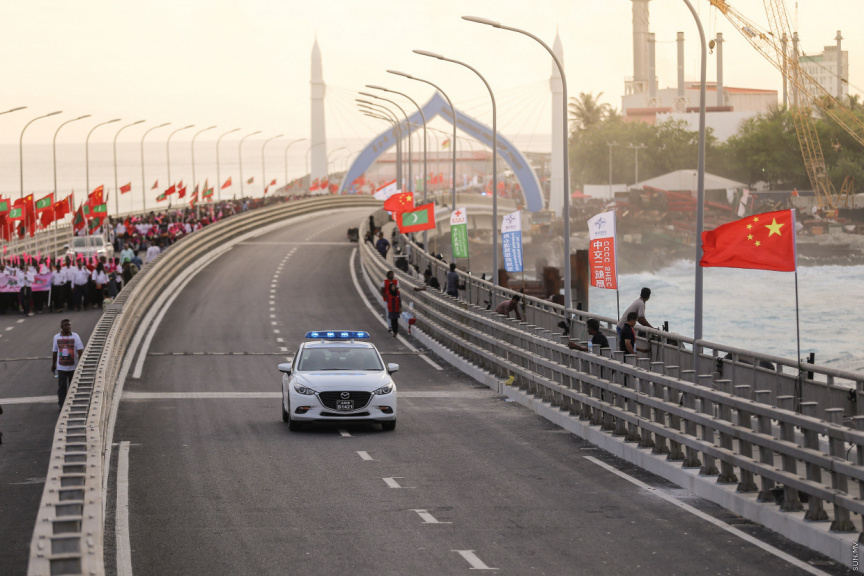 Professor Lin Changjian from Xiamen University, China has stated that the coating applied to the guardrails of Sinamale’ bridge is specifically made for the bridge and would keep the bridge rust-resistant for years to come.

The Professor, who heads the team that developed the passivation treatment and anti-corrosion coating for the guardrails on the bridge stated that three months were spent to develop the coating in laboratories, and a total of nine months were spent on testing the material on the bridge. This was why it took more than a year to develop this coating, according to Prof. Lin.

Pro. Lin Changjian is visiting Maldives from Xiamen Uni., specializes in corrosion and protection for 40 yrs. As a member of EU Academy, he leads the team to develop passivation treatment and anticorrosion coating of guardrails in the Bridge. Here are his answers to some Qs. pic.twitter.com/PL4R5B9Shn

The coating was developed by a team of engineers from Xiamen University and China Communications Construction Company (CCCC), who constructed the bridge. Prof. Lin is an experienced figure in the area with more than 40 years of experience.

Samples were taken after 24-hour monitoring of waves around the bridge for nine months, according to Prof. Lin.

The coating developed was for stainless steel and would prevent rust from accumulating underneath the coat. Introduced using nanotechnology, the coating is an environmentally friendly material according to Prof. Lin.

Prof. Lin maintained that even though there was a chance of rusting in some areas due to the constant saltwater and sunlight if maintained well, the railing would remain rust-free for years.

The bridge was built with a 100-year lifetime and around USD 200 million was spent by China and Maldives for the bridge.

The agreement with CCCC states that the company would be in charge of maintenance for the first two years of the bridge being unveiled.