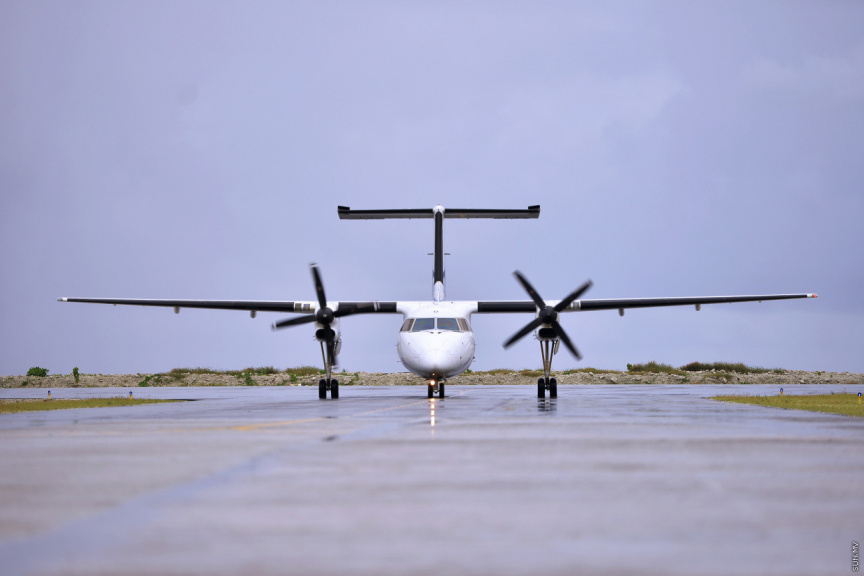 A plane of the runway of N. Maafaru airport. The airport was opened as an international one that can accommodate Airbus A320 and Boeing 737s, on December 1, 2019. (Sun Photo/Ahmed Awshan Ilyas)

After an Environmental Impact Assessment, the Environmental Protection Agency has advised against the government's plan to expand the recently inaugurated Maafaru International Airport in Noonu Atoll.

The agency stated that the expansion plans to accommodate Boeing 777 twin jets at the airport were not reasonable enough when compared with the socio-economic and environmental issues that the plan would bring forth.

There was no way of estimating the number of Boeing aircraft that would land at the airport, and the expansion plans would also see the destruction of a large area of the lagoon which would also endanger the marine life, according to the EPA.

EPA also stated that the area of the lagoon designated for reclamation was a frequent habitat of sea turtles as well as a nesting location for sea turtles and habitat for other marine organisms.

The project could also cause soil erosion, which would be extremely costly to find a solution for, according to the EPA.

The plans would also see 22,000 trees cut down, to make way for the project. There were also no plans to address this issue by the government so far, according to the EPA.

The international airport in Maafaru was opened on December 1, 2019, and has a runway large enough to accommodate Airbus A320 and Boeing 737s.

President Ibrahim Mohamed Solih announced that the company that developed the airport had expressed interest in expanding the airport so that it can accommodate Airbus A380s as well.

The funds for the project has also been approved by the UAE government.