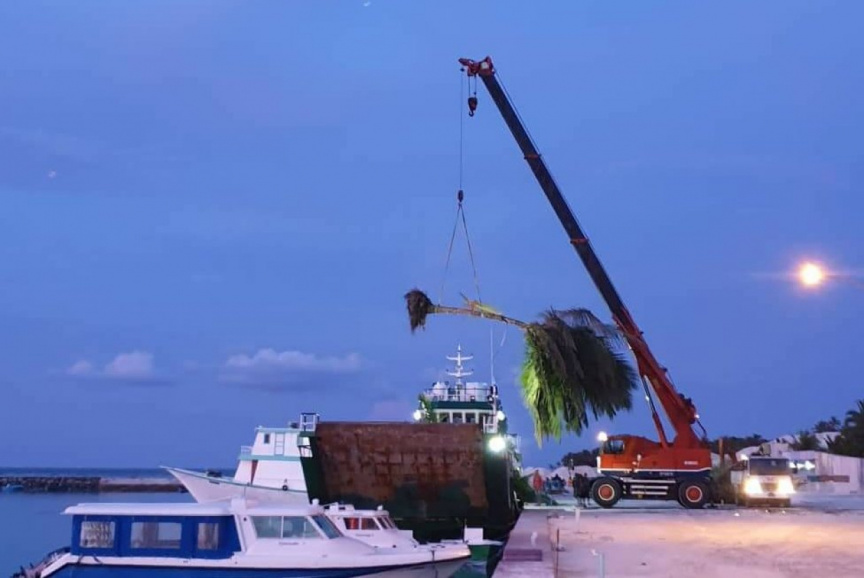 Palm trees are uprooted and transported out of a residential island in Maldives.

Local environmental group Save Maldives has criticized Environment Ministry and Environmental Protection Agency officials over its recent comments regarding removal of trees and coconut palms from residential islands by private parties for landscaping at tourist properties.

The practice of removal of trees from residential islands for landscaping at reclaimed lagoons and sandbanks developed as tourist properties - though currently regulated – remains an issue of deep concern to local environmental activists.

The Environment Ministry and EPA held a joint press conference regarding recent reports of tree grabbing in Maldives on Sunday.

One of the comments which was criticized by Save Maldives was the admission by State Environment Minister Dr. Ali Naseer that state authorities, though it was able to monitor whether tree grabbing in residential islands are carried out by permit holders and that the required quota for replantation is met, it found it challenging to monitor where the trees which are removed actually end up in after they are transported out of residential islands.

Save Maldives stressed that the state was legally obligated to protect the Maldivian environment, and protect the environmental resources which are a source of sustainable income to local residents.

It said that it found the allowance of private businesses to exploit such resources for commercial benefit unacceptable.

“We find the comments by the state body charged with the legal responsibility of leading environmental protection and the EPA which describe the irrevocable damage being done to the fragile Maldivian environment in the name of development – as a part of the developmental process and which undermine the seriousness of the situation to be highly irresponsible given the current status of the Maldivian environment,” said Save Maldives.

The group also described the comment by Dr. Naseer that Maldives had been engaged in land reclamation for the past century as an attempt to normalize land reclamation and disregard its environmental implications.

It said that it was deeply concerned regarding land reclamation being described as anything other than inflicting deliberate environmental damage for personal gain.

It said that more than 600 kilometers of the ocean has been reclaimed for land in projects in Maldives – which it said should be punishable by a huge fine.

State officials who spoke during Sunday’s conference noted that private parties issued permits to remove trees from residential islands are required to replant two coconut palms for every coconut palm which is removed.

EPA’s Director-General Dr. Ibrahim Mohamed said that the EPA ensured that the replantation regulation is enforced. He said that three residential islands which were issued permits had provided proof it had planted two palms for every palm removed from the islands, and that EPA was engaged in efforts to ensure the replantation regulation is enforced in other residential islands.

However, Save Maldives pointed out that the EPA did not have the statistics to prove the replantation regulation is being enforced. It also voiced concern that only three residential islands were found to have complied with the regulation so far.

“Can the families derive income from the coconuts planted tomorrow to replace full-grown coconut palms removed and taken to landscape resorts today?”

Save Maldives also expressed dissatisfaction over the delay in revisions to the regulation on uprooting palms and trees – which has been in the drafting process for months.

The group also the proposal it and other environmental protection lobbyists shared with President Ibrahim Mohamed Solih in September of 2018 calling for EPA to be made an autonomous body.

It said that it found the lack of efforts made to make EPA an autonomous body as failure to conduct work to ensure a healthy environment is inherited by the future generations as stipulated of Article 22 of the Constitution.