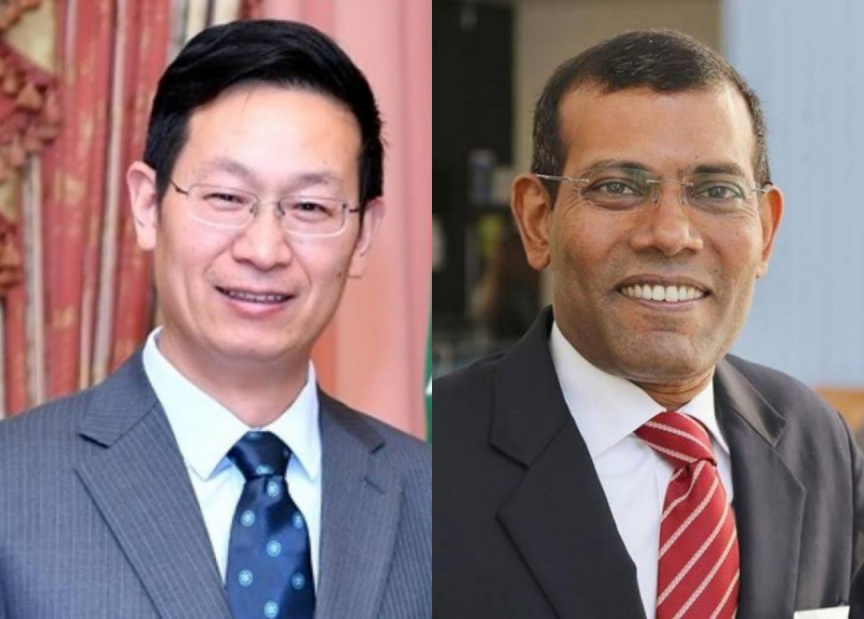 Nasheed stated during the interview that China had tricked the Maldives into debt by extending loans in the name of developing the country before calling for the loans provided by China to the Maldives to be restructured.

It should be noted that China and India are both powerful regional rivals in Asia both economically and militarily.

Nasheed’s comments were soon responded to by the Chinese Ambassador to the Maldives H.E. Zhang Lizhong. Ambassador Lizhong stated in a series of tweets that “a Maldivian political figure” has once again made "baseless comments" and claims against China. He also rejected the claim that China had grabbed lands from the Maldives.

Ambassador Lizhong stated that the investments China had made in the Maldives were similar to any other country.

“So far, only a few Chinese private companies has invested in the Maldivian tourism islands (sector), (These investments are) not yet operational.” read the Ambassador’s tweet. The Ambassador then called on the Maldives to honor the agreements made between the two countries.

Speaker Nasheed, who has significant political sway in the Maldives has also made comments regarding the Free Trade agreements signed between the Maldives and China in 2017. Nasheed has said that the agreement was not in existence and would not be continued by the Maldives.

Responding to the Free Trade Agreement comments by Nasheed, Ambassador Lizhong stated that he trusted the Maldivian Government to make a wise decision on the agreement which has already been signed by the two governments “after years of negotiations and consultations on equal footing”.

Ambassador Lizhong then stated that the ideas of a debt trap were fiction and that China acted as a contributor and not a trap maker for countries. He also noted that China is a development partner and was the single biggest market of tourists to the Maldives.

“We hope (that) Maldivian politicians have an objective and responsible attitude on bilateral ties, cherish what we have achieved to keep this important relationship on a healthy and correct track.” read a tweet by the Ambassador.

This is not the first war of words that has sparked between the Speaker Nasheed and Ambassador Nasheed, and not the first time that the two have clashed over the same issue.

Nasheed: China-Maldives FTA does not exist