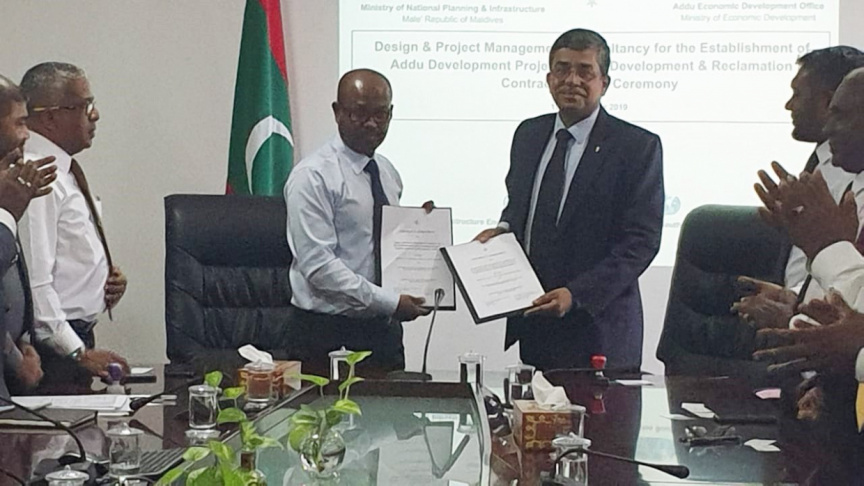 The contract was signed in a ceremony at the Addu City Council last Thursday.

The Indian Embassy has hailed the partnership between India and Maldives for the ADP – Road Development and Reclamation as “an important step forward in India-Maldives development cooperation.”

According to the embassy, it is the second project to be financed under the USD 800 million credit line extended by the India to Maldives through the Export–Import (EXIM) Bank of India.

The Indian joint venture has been contracted to complete design and project management consultancy for the project within 1,221 days.

The scope of the project includes land reclamation, road development, and the establishment of a storm water drainage system.

Initial estimates place the value of the project at around USD 127 million.

The island of Addu City had sustained extensive damage in the thunderstorms and resultant flooding which hit the city in October. Addu City Mayor Abdulla Sodhiq (Sobe) had described it as the worst disaster to hit the city in five years, and stressed the need to install a storm water drainage system in Addu.

The embassy has noted that the storm water drainage system which will be installed under the ADP- Road Development and Reclamation, in addition to upgrading the city’s infrastructure, will also mitigate floods.

The embassy says it expects the project to boost the local economy, create employment opportunities, and attract private investments directly into Addu City through tourism, fisheries, and retail and wholesale trade.