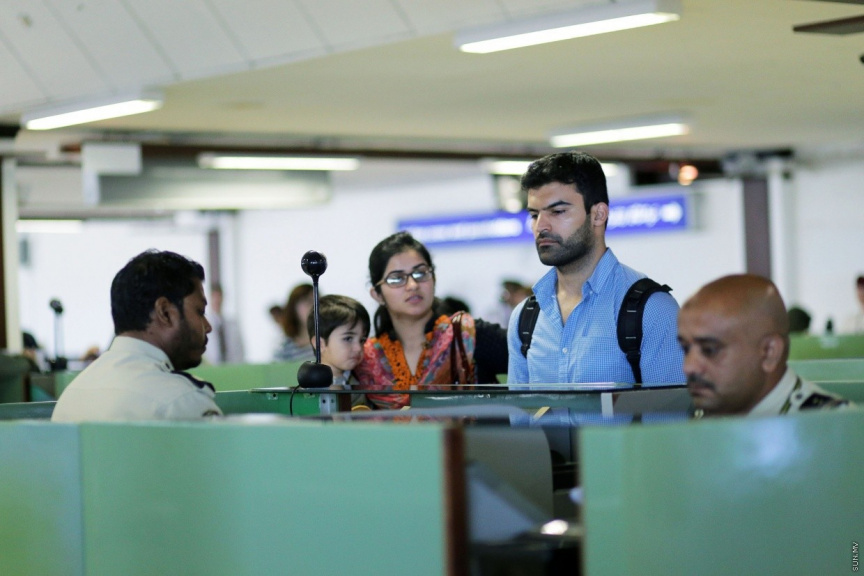 Tourists at the arrival counter of Velana International Airport. Government has proposed to increase the Airport Development Fee to USD 60. (Sun Photo/Fayaz Moosa)

The State Budget for the year 2020 has included plans to increase the Airport Development Fees charged to USD 60 to increase government income.

The current rates charge USD 12 from locals and USD 25 from foreigners. The new rates are expected to take effect from April 2020, once the law has been amended. These changes will yield the government around MVR 159.6 million which is an increase of 24.3 percent.

These changes were brought to target those travelers capable of such fees. The budget also stated that it is not expected that the increased fee would bring a huge change to the travel lifestyle of such people.

A budget of MVR 400 has also been allocated in the state budget for Small and Medium Enterprises.

The allocation was announced by Minister Ameer in the parliament today before noting the importance of such businesses in the development of the economy.

“Small and Medium Enterprises Development Corporation will provide MVR 400 million as capital next year. The government is aiming to create a fund in the Corporation in the next three years that will see its dependence on the government reduced,” said Minister Ameer.

Economic Minister Fayyaz Ismail has previously stated that applications for loans to the SME bank totaled around MVR 1 billion.

The government also decided to increase the import duty and customs fees on cigarettes by MVR 3. The increase of MVR 1 from the current rates was included in the budget for 2020 presented today in the Parliament.

The government last changed these rates in 2017 and this most recent change will increase the government’s income from customs duties and import duties to MVR 558.2 million. The changes to the laws are expected to be presented to parliament within this month.

State budget to be revised, resubmitted to parliament