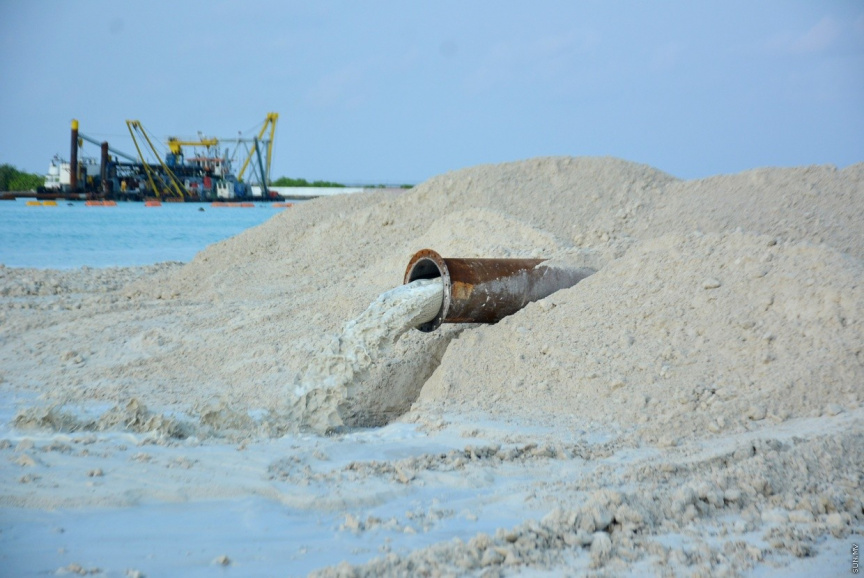 The project to reclaim land at Gulhifalhu in preparation of the relocation of the Male’ Commercial Port was contracted to Dutch company, Boskalis, last week. Boskalis was contracted the project for USD 53 million (MVR 817 million). It has been tasked with reclaiming six cubic meters of sand and building a revetment around the reclaimed land.

The biggest controversy surrounding the project is that it was awarded by the Maldivian administration without an open bidding process. Many have reasoned that the project could be carried out using Maldives Transport and Contracting Company (MTCC)’s large dredge, Maha Jarraf, for USD 44 million; saving USD 9 million of the cost.

However, MTCC’s CEO, Hassan Shah says it would take at least 600 days to complete the project using Maha Jarraf due to its limited capacity.

The Maldivian administration aims to commence port relocation at the beginning of 2020 – which can only be done by completing the land reclamation project by end of 2019 or by end of February 2020 at the latest.

Regardless of how much the Maldivian administration wants to rush the project, the question of whether Baskalis was awarded the project at a fair price remains. An answer to this can be reached through a comparison of the cost of similar projects awarded in the past.

One of the biggest land reclamation projects to be conducted in the Male’ area recent history is the reclamation of 245 hectors of land for Phase II of the Hulhumale’ Development Project. The project to reclaim the land and build a revetment around the reclaimed land was carried out by Belgian company, Dredging International, for USD 50 million.

With regard to the size, the depth of Gulhifalhu means at least six cubic meters of sand is required - which will reclaim no more than 75 hectors of land. The main reason for this is that land needs to be reclaimed to the depth of eight meters – roughly the size of the largest Maldivian island.

The value of a project is primarily determined based on the quantity of sand required for land reclamation.

Additional factors which contribute to the value of such projects is the depth of the location, and the current– which could make it further challenging to reclaim land.

The size of the area which will be reclaimed in Gulhifalhu is still smaller than Hulhumale II – therefore requiring lesser quantity of sand. However, the Gulhifalhu project is valued at USD 3 million more than the Hulhumale’ II project.

13-year-old subjected to not one, but three ‘marriages’