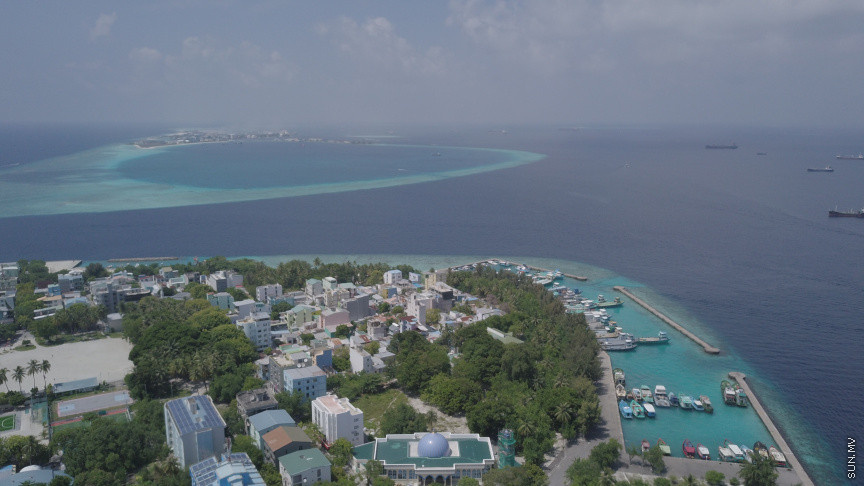 Gulhifalhu is visible in the distance in this aerial shot of Vilimale'. (File Photo/Sun/Fayaz Moosa)

A European joint-venture company has been contracted consultancy work on the planned international port in K. Gulhifalhu for USD 1 million.

Water Solutions, Clarion Maldives, and Beach Rock Ventures have been selected as sub-consultants for the project.

The European joint-venture company was awarded the consultancy work on Gulhifalhu Port Project on August 28 for USD 1,050,362.

Once the Gulhifalhu Port is complete, the Male’ Commercial Port will be relocated to Gulhifalhu, easing marine congestion and delays in cargo clearance at the current port.

Finance Ministry had posted announcements for a party to carryout consultancy work on the project two times.

The Gulhifahu Port Project is part of the Greater Male’ Development Project which was pitched by the Maldivian government to foreign investors during the Maldives Partnership Forum earlier this year.

President Ibrahim Mohamed Solih announced the government will begin work on the causeway between Male’ and Gulhifalhu in February, 2020.

“Relocating the Male’ Port, the Commercial Port to Gulhifalhu will be one of the largest projects which will be run in this region. And linking Male’ and Gulhifalhu via a causeway is also a large-scale project. The project has been opened for consultancy, and shortlisted. In Sha Allah, land reclamation will begin in November, and structural work will begin in February next year. This work is projected to take at least two years,” said President Solih, speaking at a press briefing in July.

The Maldivian government has announced it expects the project to ease the flow of cargo within the Greater Male’ Area and boost the economy.