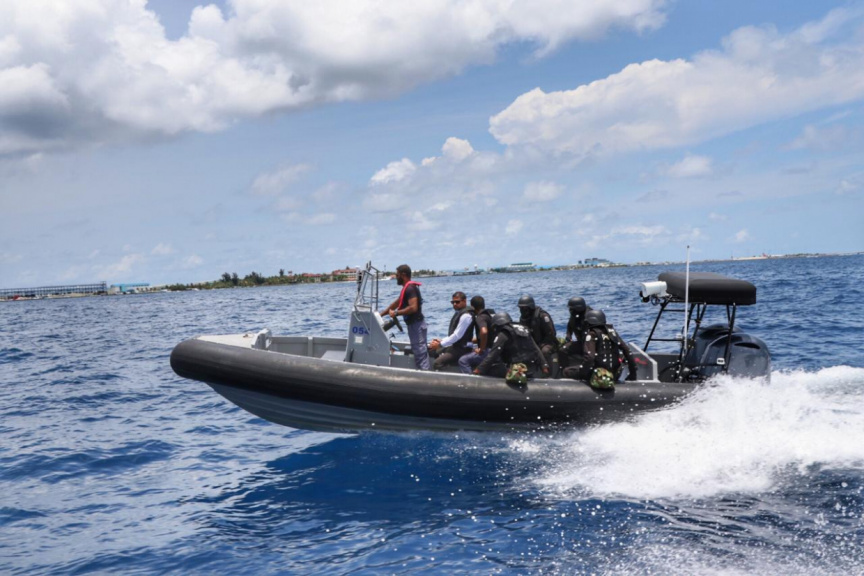 Police search the sea in connection to the 2014 abduction and murder of Ahmed Rilwan Abdulla on September 11, 2019. (Photo/Maldives Police Service)

The search and seizure operation by the police in connection to the 2014 abduction and murder of journalist Ahmed Rilwan Abdulla has been expanded to encompass areas in both lands and sea.

Police confirm the operation is being conducted to enforce search and seizure warrants issued by the Criminal Court at the request of Commission on Disappearances and Deaths.

The operation began at approximately 6:30 pm on Tuesday and has continued into a second day.

The three properties being raided this Wednesday are:

Commission on Disappearances and Deaths recently announced that it had evidence he was abducted from Hulhumale’ where he resided, forced into a car, put on board a dinghy boat and transferred to another vessel – onboard which he was beheaded, and his body thrown overboard.

The properties being raided are connected to some of the people named as suspects by the Commission on Disappearances and Deaths in its draft report on the case.

The property searched in Addu City is connected to Mohamed Aqlyl (Kidu) – who the commission suspects had arranged for the vessel onboard which Rilwan was killed.

Other suspects whose properties have been searched include Samih Mohamed (Sawmith) from Th. Omadhoo and Ali Shiyam (VB Ayya) from H. Vaalee Villa.

The armed forces had maintained security in the streets of Male’ City amid the raids.

President Ibrahim Mohamed Solih has promised swift action in response to the commission’s findings, warning the country’s law enforcement agencies would not hesitate to arrest anyone necessary in connection to the case.

Police: Corpse found in Soneva Jani yet to be ID’d