Rilwan’s Father: Protests in Rilwan’s name was a ruse to secure presidency 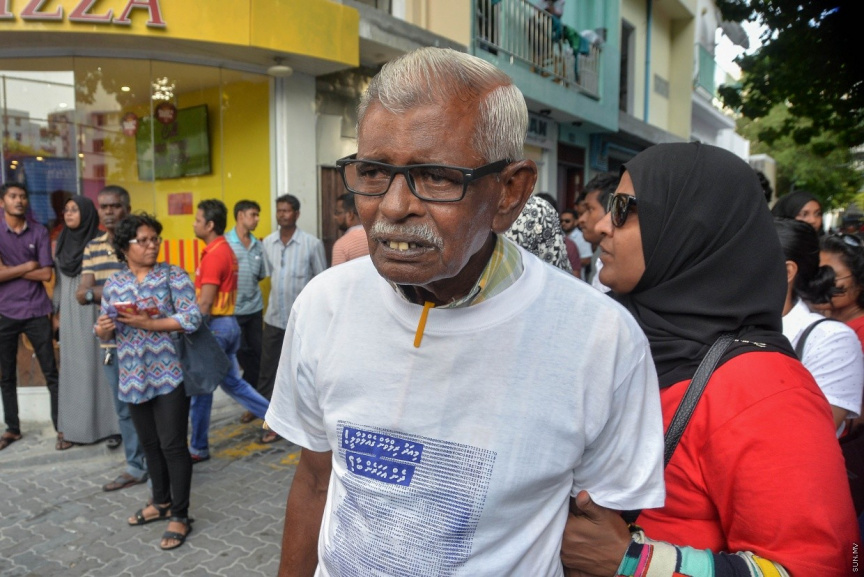 The father of Ahmed Rilwan Abdulla, a journalist who worked for Minivan News (later renamed Maldives Independent) who is believed to have been abducted and murdered – has stated that the protests by Maldivian Democratic Party (MDP) in the name of urging justice for Rilwan was a ruse to secure presidency.

In an interview to local news outlet Channel 13, Rilwan’s father, Abdulla said that President Ibrahim Mohamed Solih and Parliament Speaker Mohamed Nasheed had walked with banners in protest urging justice for Rilwan only to secure votes. He added that Speaker Nasheed had “disappeared” after being elected for his post.

“I had gone, about 20 to 20 times. Nevertheless, I did not get a satisfactory response,” he had said.

As per Abdulla, the current administration had promised justice for Rilwan with the first seven days from the date office is assumed.

“I believe that these were remarks made him to secure presidency. They made us walk with banners,” he had said.

Abdulla said that he has lost trust in the current administration – adding that he does not believe the administration will ensure justice for his son.

He underscored having worked alongside MDP for a longtime. Abdulla said he was completely sidelined after his son’s death.

Abdulla detailed that MDP was against him vising its campaign houses at present. In this regard, he said a staff had informed him not to enter on one occasion.

‘BELIEVE YAMEEN HAS NO ROLE IN RILWAN’S DISAPPEARENCE, NOT HEAVY HEARTED TOWARDS HIM’

Speaking in his interview, Abdulla said he does not believe former President Abdulla Yameen Abdul Gayyoom who was summoned for investigation over Rilwan’s disappearance has anything to do with it. He also added that he is not heavy hearted towards Yameen.

To reason his remark, he detailed former President of Commission on Disappearances and Deaths (DDCom) Husnu al-Suood having relayed to him that Yameen had no role in Rilwan’s case.

“After Suood said that, I have believed he has no hand in it. Suood said Yameen had no role in it. Even if there was, it was not Yameen’s hands. I stopped from there onwards,” he had said.

Abdulla said that he previously alleged Yameen had a role in his son’s disappearance due to misconceptions he had at that time. He added if Suood has not relayed what he did, he would still feel heavy hearted towards Yameen today.

“If Suood had not said so, I would have been heavy hearted as well. But now, I know, it was not him who did that. It is not something he was aware of,” he had said.

Reiterating his belief that the current administration will not be able to find justice for Rilwan – Abdulla underscored the administration’s failure to make funeral arrangements for his son. He added that a funeral can only be held for Rilwan if Yameen is elected as a president again.

“Efforts to ensure justice for Rilwan can now only be undertaken by Yameen. A funeral can only be arranged for him by Yameen. Will work alongside Yameen. He can do this. I want to campaign for him as well,” he had said.

The state charged three individuals with terrorism regarding the case. They are Ahmed Alif Rauf, H. Hilton, Male’ City; Mohamed Suwaidh, Athireege, S. Hulhudhoo and Mohamed Nooradheen, Karankaage, GDh. Vaadhoo. Some medias have reported that Suwaidh has died in battle at Syria, citing his family as the source of information.

Therefore, the trial was only held for Alif and Nooradheen. However, Criminal Court had found them both not guilty.

Justice for Rilwan’s death is an electoral pledge of President Ibrahim Mohamed Solih. The case remains under investigation six years on, and has yet to produce any convictions – which has garnered much criticism from the public.