Rilwan's family left heartbroken, no room for forgiveness to killers 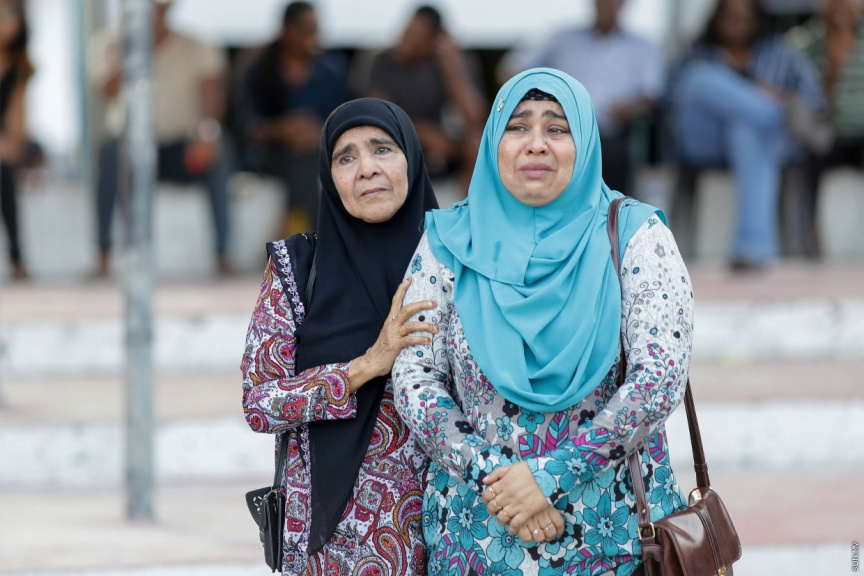 April 24, 2017, mother and sister of murdered journalist Ahmed Rilwan at a gathering calling for justice in the case. (Sun Photo/Fayaz Moosa)

A press conference held by the Presidential Commission on Murders and Enforced Disappearances yesterday confirmed for the first time from an official government source that Minivan News journalist Ahmed Rilwan who went missing five years ago was indeed murdered.

The news would most gravely affect Rilwan's family who have been begging for answers regarding Rilwan's disappearance for five years now. Even though they did not get a complete answer from the Commission, it was still something that would give them a sense of closure.

Shehenaaz Adam who spoke to "Sun" on behalf of the family, stated that the information revealed by the Commission on Murders has left the family speechless. There is no end to the tears streaming down the face of Rilwan's mother. The news and revelations have sunk the family into a sea of sorrow and heartache.

"We are of course extremely saddened by the news. She (Rilwan's mother) has still not stopped crying since she heard the news. All we ask if for those who committed this act to be brought to justice,", said Shehenaaz, who also couldn't hold back her tears.

The family strongly believed that the authorities had been negligent in dealing with the case, according to Shehenaaz who had a difficult time speaking. She also stated that the family had worked hard to bring this administration into power because they had a small hope that justice would finally be delivered for their brother. Shehenaaz stated that there was no other way for the family to live in peace.

"We will not forgive anyone involved. We want the death penalty (Qisas). They committed a heinous act against someone innocent. We do not want to forgive anyone," said Shehenaaz.

The press conference held yesterday by the Presidential Commission saw its president Husnu Al Suood reveal that Rilwan had been kidnapped and forced into a red car near his residence. He was then taken to a dinghy which in turn left for a boat somewhere out on the ocean. Rilan was killed on the boat by strangulation with a net by the men who kidnapped him, stated Suood.

Umar Naseer, who was the Home Minister when the incident happened stated that the information was known in the investigation carried out by police as well.

Shehenaaz replied to the comments by the former Home Minister that the family had "begged" for answers from the government regarding Rilwan, but had always received replies of sarcasm of mockery.

"Umar told us (Rilwan's family) that there had been no developments in the investigation. Sarcasm or answers meant to mock us such as the person was living on some island and was wearing face veils or niqab or the person was living in somewhere disguised as a woman were what we got from him," said Shehenaaz.

However, the statements by Rilwan's family was refuted by Umar Naseer. He stated that he had met with the family every time they requested and the reason that he did not divulge this information to the family was that it was information received by the police intelligence unit.

Rilwan's family had finally received some answers regarding his disappearance. even though there is still plenty of more information to be brought to light, this will not console the family. They have demanded that the people who carried out this crime be brought to justice.